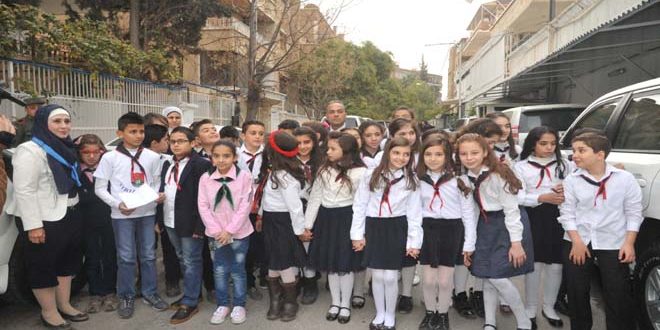 Damascus, SANA-A number of al-Ba’ath Arab Socialist party’s children and their supervisors sent on Tuesday letters, on behalf of all Syrian children, to the UN in protest of the terrorist organizations’ attacks on the schools in Aleppo , calling on the international organization to apply UN security council resolutions relevant to combating terrorism. “We want to go to our schools without fears of a car bomb, we want to play without a surprise of shells or explosive devices,” the children wrote in the letters which were handed over to Hanaa Sinjer, UNICEF resident representative in Damascus.

The children called for ending terrorism and halting the financing of terrorists who target the schools and cities.

The terrorist organizations targeted al-Furkan school, on Nov.20, with a rocket shell, killing 8 pupils and injuring 20 others.

Syria children send letters to UN in protest of terrorists attacks on schools 2016-11-29
m.eyon
Share
Previous Thousands of locals exit eastern neighborhoods of Aleppo and are escorted to safety
Next Speaker of the People’s Assembly Hadiyeh Abbas offers condolences on death of Cuban Leader Fidel Castro