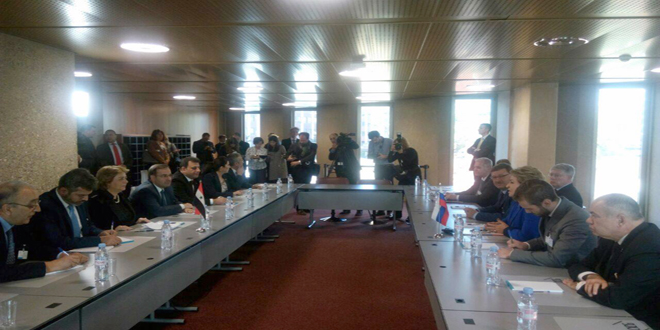 Geneva, SANA- Speaker of the People’s Assembly Dr. Hadiyeh Abbas discussed on Thursday with Speaker of the Russian Federation Council Valentina Matviyenko the bilateral relations between Russia and Syria.

During the meeting in Geneva which came on the sidelines of the 135th meeting of the Inter-Parliamentary Union (IPU) Assembly in Geneva, the two sides discussed means to activate the parliamentary cooperation to confront terrorism which is spreading in the region and the whole world as well curbing the intervention policies in the internal affairs of Syria pursued by some countries.

In turn, Matviyenko stressed Russia’s unwavering support for Syria in the fight against terrorism which poses a challenge and a major obstacle to finding a political solution to the crisis in Syria, adding that the Russian participation in the war against terrorism in Syria is in the interest of this political solution and serves in ridding the world of this deadly scourge.

For her part, Abbas thanked the Russian leadership, government and people for their standing by the Syrian people, hailing the Russian exerted efforts to help the Syrian state to alleviate the suffering in Syria due to terrorism.

She pointed out that the Syrian-Russian cooperation in combating terrorism that threatens the entire world will be crowned with victory, stressing Syria’s adherence to strengthening bilateral and parliamentary cooperation for the benefit of the two peoples.

Matviyenko invited Dr. Abbas to visit Moscow heading a parliamentary delegation to continue the discussion on the ways of activating cooperation.

The 135th meeting of the Inter-Parliamentary Union (IPU) Assembly concluded activities today with the participation of the Syrian People’s Assembly delegation headed by Dr. Abbas.