Al-Jaafari: Washington’s decision to suspend cooperation with Russia shows absence of political will to fight terrorism 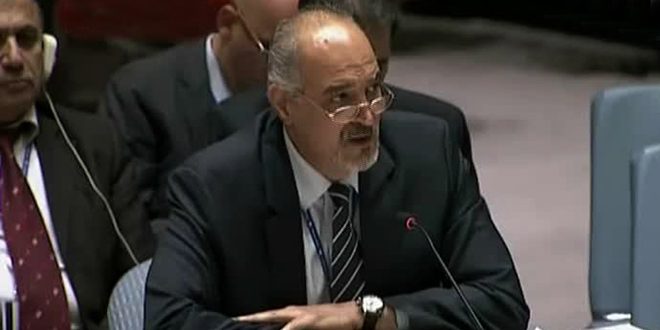 New York, SANA – Syria’s Permanent Representative to the UN Bashar al-Jaafari stressed that the US decision to suspend bilateral cooperation with Russia on Syria show the absence of Washington’s political will in the field of fighting terrorism and affirms its continued endeavors to protect all terrorists affiliated to Jabhat al-Nusra.

During his speech at a UN Legal Committee session held on Tuesday under the title “measures to eliminate international terrorism,” al-Jaafari said that Syria expresses deep concern over the United States’ evasion of the agreement which it had reached with Russia last September, an agreement which stipulates that the United States must persuade the opposition groups it supports and labels as “moderate” to separate themselves from Jabhat al-Nusra terrorist organization.

Al-Jaafari underlined that the only way to guarantee fighting terrorism is by establishing an efficient international coalition within the framework of international legitimacy with the participation of all concerned countries, on top of which is the Syrian state.

Syria’s Representative welcomed the Russian role in fighting terrorism which came upon the request of the Syrian government and adheres to international law, and he also welcomed Iran’s role as it exerts similar efforts in this regard.

He pointed out that the practices of the so-called “international coalition” led by the United States prove its incompetence, dishonesty, and lack of seriousness in fighting terrorism in Syria and Iraq.

“That was evident that few days ago, when the aircrafts of this coalition targeted sites of the Syrian Arab army at Tharda Mountain in Deir Ezzor, claiming the lives of tens of officers and soldiers who were fighting ISIS at that area, and allowing ISIS terrorists to establish temporary control over those sites,” Al-Jaafari said.

He pointed out that the coalition aircrafts are still carrying out airstrikes in this area but do not target the ISIS and terrorists; rather they target the infrastructure and bridges which the civilians are using to move between the two banks of the Euphrates River in the city of Deir Ezzor.

HE went on to say that the terrorist acts committed against some member states prove that the acts and resolutions issued by the UN Security Council and General Assembly , including the UN world strategy on fighting terrorism, have been ignored several times under various pretexts, but this is mainly because of the absence of the political will by some countries or the direct or indirect involvement of the governments of certain states in supporting terrorism and instigating violence and criminal terrorist acts.

Al-Jaafari reiterated that the underhanded terrorist war hatched against Syria since six years ago is the fiercest and most tragic example of the double standards and the dangerous policies adopted by some member states at the Security Council, and he went on to call for serious and fast actions to implement the agreement on fighting terrorism, including setting a legal, clear, and non-politicized definition for terrorism and distinguishing it from the right of the people to end the occupation of their lands by others by force and their right to practice their rights of self-determination.

He called for rejecting the attempt by some of the Security Council’s member states to justify any interference or military action in Syria under the pretext of fighting ISIS based on provision no. 51 of the UN Charter, as this interference would be done without any coordination with the Syrian government and it would seek to undermine Syria’s sovereignty.

Al-Jaafari affirmed the necessity of combating the phenomenon of foreign fighters and preventing terrorists from using telecommunications, the internet, social networking websites, radio stations, and TV channels to recruit youths, calling for monitoring the borders, exchanging information, and drying the sources of financing terrorism in deed, not just in words.

In this regard, he cited an example on one of the social networking websites which has recently reached an agreement with one of the states that occupy the lands of another state by force to prevent what it called “messages of hatred and incitement against it.”

He added that this website is considered a propaganda tool for different terrorist groups, on top of which are ISIS, Jabhat al-Nusra, Jaish al-Fateh, Jaish al-Islam, and other terrorist groups in Syria and Iraq, indicating that the website shows the news of these groups and ways of joining and financing them.

Al-Jaafari said that one can follow the news of terrorists through this website or other social networking websites at a time when the states which support terrorism are boasting about the measures they have taken in the domain of combating terrorist groups which some of the Security Council’s member states call “moderate opposition,” in addition to the strange term of “non-state armed groups ” which is alien to the principles and goals of the UN Charter.

Al-Jaafari announced the approval of the Syrian delegation on the statement delivered by the Iranian Permanent Representative to the UN on behalf of the Non-Aligned Movement (NAM) member states.

He also challenged the eligibility of the head of the 6th Committee who is the representative of the Israeli entity, indicating that the authority of the Committee is related to respecting the international law and preventing any violations of it, while the Israeli entity continues to occupy the lands of other state by force and continues its hostile measures in different domains.