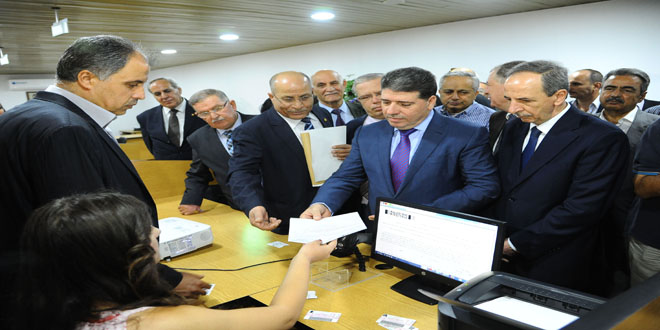 Prime Minister Wael al-Halaqi, who attended the launch of the projects, said these two endeavors are part of the judicial reform process and the overall reform efforts, with the Justice Ministry beginning to archive legal documents and provide them in electronic form in order to simplify the procedures and curb counterfeiting, waste of resources, and damage to documents, and to reduce corruption and red tape as well.

About the electronic copy record-keeping, al-Halaqi said that this program allows accessing the decisions of all the courts, adding that the project aims at preserving the judicial rulings through arranging them in a way that make it easy to refer to them as they are kept on a private server at the Ministry.

For his part, Deputy Justice Minister, Judge Taysser al-Smadi, explained the mechanism of the electronic issuing of the power of attorney and legal documents, noting that the projects were prepared by the Ministry in cooperation with Damascus University.

He added that the project was launched in a number of provinces, with the archiving operations being finished in Damascus, Damascus Countryside, and Quneitra while archiving is underway in Tartous and Lattakia, noting that the number of the archived power of attorney documents reached 5 million.

Talking about electronic copy record-keeping, al-Smadi said that the Ministry, in cooperation with the Higher Institute for Applied Sciences and Technology, made a program dedicated to the protection of judicial rulings, arranging them, and making them easy to access.