Syria and DPRK sign an executive program for cultural cooperation 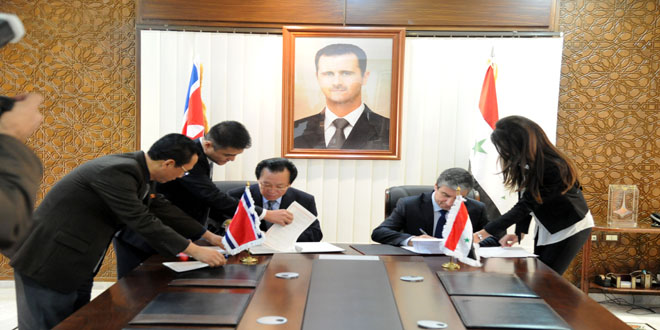 Damascus, SANA – The Culture Ministry signed on Wednesday with the Embassy of the Democratic People’s Republic of Korea (DPRK) the executive program for cultural cooperation for the years 2015, 2016 and 2017.

Cooperation in cinema will include holding film weeks in both countries and exchanging movie experts and participation in film festivals.

In theatre, the program will involve cooperation in exchanging visits of artistic bands and participation in music and theatre festivals, in addition to supporting cooperation between the Higher Institute of Dramatic Arts in Damascus and its counterpart in the DPRK.

The two sides will exchange expertise and visits and hold exhibitions in painting, sculpturing and publications in the framework of cooperation in the arts field, according to the program.

As for copyrights cooperation, both sides will encourage protection of literary and artistic groups and copyrights and intellectual property rights, especially at the international forums.

The program also provides for cooperation in the music field where both sides cooperate in teaching music, exchanging visits and holding culture days in both countries.

Culture Minister Issam Khalil said in a press statement following the singing that this program is part of activating cooperation between Syria and Democratic Korea as both countries face continuous attempts aimed at undermining their independent political decision and sovereignty.

In turn, Ambassador Jang Myong Ho of DPRK said the program shows that bilateral relationship between the two countries is developing in all fields.