Moscow: It is impossible to defeat terrorism without cooperation with Syria 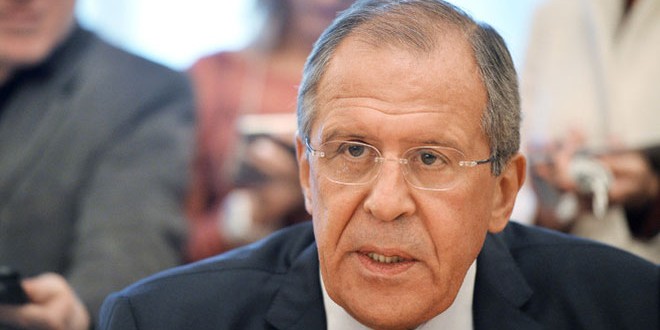 Moscow, SANA-Russian Foreign Minister Sergey Lavrov said on Thursday that turning a blind eye to the capabilities of the Syrian army in combating terrorism equals risking the region’s security for the sake of achieving Geo-political plans.

“Those who combat the Islamic State in Iraq and Syria (ISIS) terrorist organization should unify efforts, including the Syrian and Iraqi armies, based on international law and through UN organizations,” Lavrov said in a press statement following a meeting with Turkish counterpart Mevlüt Çavuşoğlu in Sochi.

“There are no justifications to escape cooperation with the Syrian leadership who confronts the terrorist danger,” Lavrov added, affirming that the Syrian President is the higher leader of a land force which is the most effective and which confronts terrorism on land.

He reiterated that Moscow’s stance is still firm towards Syria where the Syrian people have the right only to determine their future and leadership through democratic mechanisms and elections, adding that the international community should work to have the democratic process and elections fair and transparent and under the supervision of unbiased organizations. Meanwhile, The Russian Foreign Ministry called for unifying the international efforts through a unified front to combat ISIS, affirming that it is impossible to reach an outcome without the participation of Syria.

Spokesperson of the Russian Foreign Ministry Maria Zakharova, at a press conference, called on Washington to acknowledge the volume of danger represented by ISIS and the impossibility to fight this danger except by “a unified front.”

Zakharova reaffirmed the Russian military support to Syria, saying “we have never made it secret that we carry out and continue applying cooperation with Syria, including the military domain as the Syrian army is bearing the big burden in the war against terrorists.

Moscow: It is impossible to defeat terrorism without cooperation with Syria 2015-09-17
m.eyon
Share
Previous Hungary PM blames Western interference for migrant influx
Next Al-Moallem: Russian escalation is due to terror threat and is important for influencing the West