The first phase includes the establishment of the main pumping station in Ein Diwar area at an overall cost of up to 193 million euro, the equivalent of SYP 30 billion.

The project seeks to draw water from the Tigris River with a total amount of 125 million cubic meters annually, with a monthly pumping rate ranging between 10 and 100 cubic meters per second.

Minister of Water Resources Bassam Hanna underscored the economic significance of the project in developing the sprawling eastern region in Syria as, he says, the project is set to irrigate a new area extending over 150,000 hectares and an old one of 64, 000 hectares.

This brings the total area irrigated by the project to somewhere near 214,000 hectares, a high and important percentage compared to standing projects on the Euphrates, the minister said.

Speaking to journalists about the project, Hanna said that it comes as part of President Bashar al-Assad’s directives to improve the living conditions of citizens, hailing it an important juncture to alter the agricultural landscape in the Tigris and Khabour basin.

He also cited a significant added value to the project which, the minister said, is an important lever to achieve agricultural security.

Minister of Agriculture Ahmad al-Kadri, for his part, said the project is ranked among the significant development projects in a region that primarily depended on the rain downpour for irrigation, highlighting its significance for developing the eastern region.

Charge d’affaires of the Russian embassy in Damascus told journalists that the project whose phases are slated for completion will ensure more opportunities to the residents of the eastern area to develop agriculture there, citing a pressing need in Syria to improve agricultural conditions during times that see lack of rain. 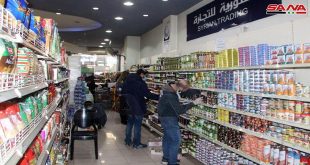 Syrian Trade Establishment: No increase in prices of basic materials

Damasacus, SANA-Director General of Syrian Establishment for trade, Ahmad Najm, affirmed on Wednesday that what …