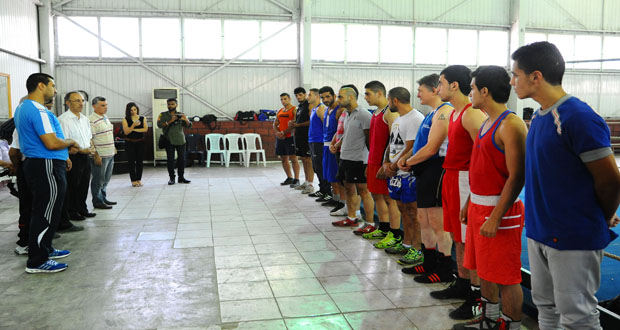 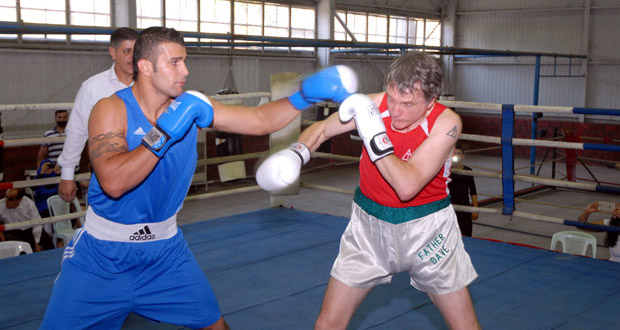 Damascus, SANA – Members of the Australian delegation, who is visiting Syria to show solidarity with its people in the face of terrorism, conducted Thursday joint practices with members of Syria’s national boxing team at al- Faihaa Sports City in Damascus.

The delegation, who arrived in Damascus on Wednesday, said they were happy with their visit and want to know more about sports in Syria as it is still being practiced normally despite of the terrorist war, raging in the country since 2011. Visiting Syria for fourth time, David Smith, a clergyman and a boxer, told SANA that the visit is an opportunity to “stretch sport bridges” between the athletes of the two countries.

Smith appreciated the high-level Syrian athletes, asserting that the level of sports in Syria turned out to be above expectations given the extraordinary circumstances in Syria.

For his part, Boxer Jacob Najjar, an Australia champion, described al-Faihaa sport City in Damascus as one of the best sports cities he has come to play at in a number of countries.

Australian athletes are scheduled to hold evening training sessions with their Syrian counterparts, in addition to playing joint matches on Friday. The delegation, that includes sports and media figures, in addition to Australian activists, will stay in Syria till July 23.

Australian sports delegation 2015-07-16
Barry Temmo
Share
Previous Peskov: Russia and US hold dialogue about finding solution for crisis in Syria
Next Free of charge courses of old and foreign languages at Damascus University

Urban Economic Forum kicks off with participation of Syria