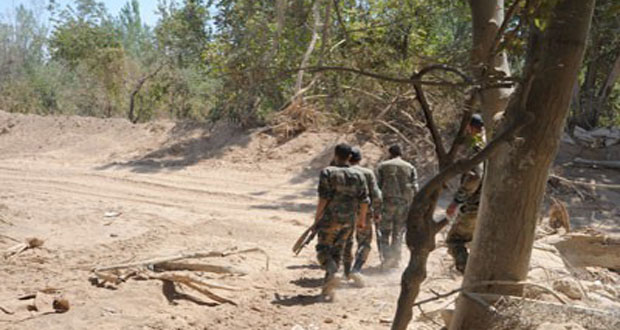 Provinces, SANA_ Units of the army and armed forces continued Friday pursuing the armed terrorist groups and carried out successful operations against their dens and gatherings across the country, inflicting heavy losses upon them.

A military source told SANA that army units established full control over the points 714, 767 and 803 on al-Forolluk-Kassab road in Lattakia northern countryside, having killed large numbers of terrorists who stationed there.

Army units killed and wounded terrorists during a string of operations against their gatherings in East Ghouta and several other towns in Damascus countryside.

Palestinian and Saudi terrorists affiliated to “Liwa al-Islam” and “Saifullah al-Masloul” brigades were among the killed terrorists.

SANA field reporter sais army units have eliminated members of an armed terrorist groups, including their leader “Ziad al-Rijjal” from the so-called “Saifullah al-Masloul” brigade on the axis of al-Maliha-Jisreen.

A leader of a terrorist group from the so-called “Liwa al-Islam” nicknamed Abu Ossama was killed in the farms surrounding Tameco pharmaceutical company north of al-Maliha.

Other operations were launched in Alia farms and Tal Kurdi in Douma, with terrorists’ dens and gatherings targeted. Many non-Syrian terrorists were killed, among them Abdullah al-Rajihi, a Saudi and Sulaiman Ataya, a Palestinian.

Terrorists also got killed to the south of the Teachers’ residence in Jobar neighborhood.

In the meantime, am army unit razed a terrorists’ hideout with the weaponry and ammos inside in al-Ara district in Zabadani. The terrorists Mohammad Zaaroura and Khaled Omar were identified among the dead.

Terrorists also got killed in Rankous plain when an armed group attempted to sneak to Rankous town in Damascus northern countryside.

In Aleppo, the army units killed and wounded a number of terrorists, including leaders of terrorist groups and destroyed a repository of improvised explosive devices and ammunition in al-Fardous area.

According to a military source units of the army and the armed forces eliminated a number of the armed terrorist groups’ leaders in Jub al-Safa.

Abo Muslem al-Tawheed and the so-called Manbej and al-Bab emirs were identified among the dead.

The source added that an attack on Aleppo central prison was thwarted by the army.

Other army units destroyed a pickup with all terrorists inside it in the northwest al-Ghezlan farm while heading for al-Yadodeh town in Daraa.

Meanwhile, a military source said that an army unit has killed leaders of terrorist groups and wounded others when it pummeled their hideout near Deir Al-Sulb Mosque in al-Hrak town.

Other units destroyed a terrorist hideout and two vehicles, one of them equipped with a machinegun, along with the terrorists inside them in the areas of al-Hadiqa and Deir al-Salt in al-Hrak.

A den for terrorists was razed in Enkhel town and several vehicles were destroyed near the Green Mosque in al-Naima town.

Army units also killed terrorists northeast of Zamrin and in the vicinity of al-Naima northern water tanker, as well as in al-Lajat area and to the north of Um Hawran.

In Daraa al-Balad, army units targeted terrorist gatherings in al-Bajabja neighborhood and to the south of SyriaTel building, in the camp and to the east of Basi square, killing several terrorists and wounding others.

A second unit targeted a terrorist group east of Bait al-Jamal in Atman town, killing and wounding several of its members.

In Homs countryside, Army units destroyed terrorist gatherings in the areas of Oum Sehrij, Rahoum, Salam Gharbi, al-Sultaniye, and Arshoune, Oum Sharshouh, and Ein Hussein, in addition to other gatherings in Teldo, al-Samalil, Burj Qai’I, Talaf, and Tal Dahab in al-Houleh, resulting in the death and injury of several terrorists and destroying their equipment.

Other units targeted terrorist hideouts near al-Arbayeen mountain, Maar Tabi’I, Idleb-Harem road, al-Bashiriye, and Bakfaloun in Idleb countryside, injuring a number of terrorists and killing others.