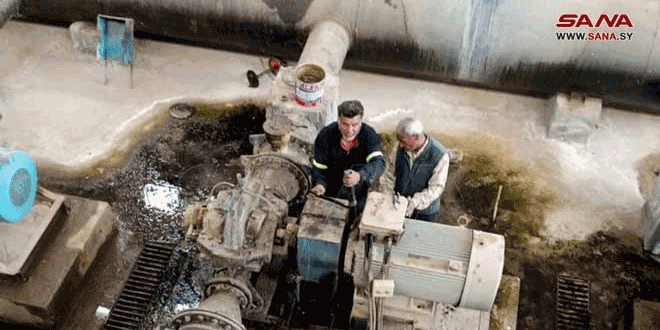 Hasaka, SANA- The General Establishment for Drinking Water in Hasaka Province has started to pump water to the center of Hasaka City after a stoppage that lasted for 17 days due to attack launched on  Alouk water plant by the Turkish occupation mercenaries.

Director-General of the Establishment Eng. Mahmoud al-Okla, in a statement to SANA reporter, said that the process of pumping water from the water gathering tanks in al-Himmeh station towards the center of Hasaka City has started on Sunday noon after a stoppage that lasted for 4 days due to the weakness of the water as a result of the attack of the Turkish occupation mercenaries either through stealing the electricity feeding the Plant or stealing the water to irrigate the plants in the countryside of Ras al-Ayn City.

It is noteworthy that due to the attacks on Alouk Project, the time needed for the process of pumping water for all the six sectors of Hasaka City and its surroundings needs three days as water re-pumped to each sector in 18 day.