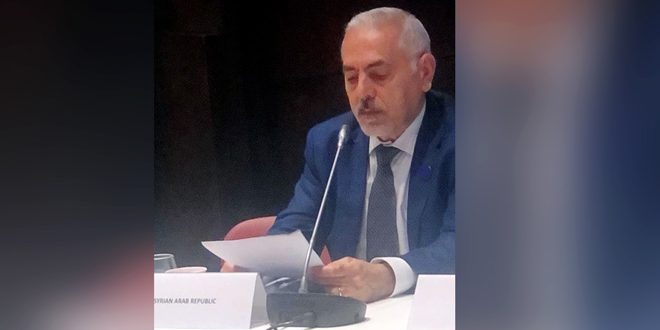 Madrid, SANA-Syria has affirmed that confronting the global terrorism phenomenon entails real international cooperation and putting all relevant international resolutions into practice, on top of which is the comprehensive United Nations strategy to combat terrorism, with the need to emphasize the priority of national ownership and leadership for counter-terrorism efforts, and to stress the need to respect the sovereignty of states and not to overstep their national jurisdiction.

That came in a statement by Head of the Syrian mission in Madrid, Ambassador Samir al-Qassir before the United Nations High-level Conference entitled “For a future free from terrorism: Building resilience with civil society through the rule of law and human rights”.

Al-Qassir said “One of the outcomes of the ongoing terrorist war against Syria is the spread of the phenomenon of recruiting foreign terrorists and members of their families through the use of communication techniques via the network and social media for criminal purposes. To date, there are more than 60,000 of them in a number of illegal detention centers under the control of terrorist separatist militias under horrific humanitarian conditions in which children and women are subjected to the most horrific forms of detention, sexual exploitation, torture and other egregious violations of human rights.”

The ambassador pointed out that the efforts of the Syrian state to re-establish its authority, empty the detention camps of detainees there, and end the state of suffering and the inhumane conditions in which they live are hampered by the persistence of some countries to evade their legal obligations such as taking back their terrorists and their families, holding them accountable and reintegrating them.

He noted that when discussing the issue of international terrorism and human rights, it must be pointed out that some countries have resorted to adopting policies that rise to the level of economic terrorism by imposing illegal unilateral coercive measures against certain peoples, including the Syrian people, whom they deprive of securing their basic needs in clear violation of the Charter of the United Nations and human rights instruments.

The Head of the Syrian mission in Madrid indicated that during the past ten years, terrorist organizations deceived large numbers of Syrian youth and indoctrinated them with extremist Takfiri ideology, taking advantage of their deteriorating material conditions to mislead them to be tools for implementing their terrorist schemes.

He added that the state took the initiative to develop plans and programs to dry up the sources of extremist ideology and raise awareness among young people, including by adopting comprehensive settlements and reconciliations as a means to reintegrate them into society and return them to their normal lives as President Bashar al-Assad has issued 20 general amnesty decrees since 2011, and they included anyone who was not involved in any terrorist acts or criminal activities punishable by Syrian law.

The ambassador reiterated Syria’s emphasis on the need to support capacity-building activities and technical assistance in the field of combating terrorism and to strengthen national efforts aimed at consolidating the rule of law and achieving sustainable development priorities in order to achieve a comprehensive social approach that contributes to combating terrorism and its root causes.

The ambassador pointed out that Syria is working on developing national legislation and adapting it to the challenges it has witnessed during the past ten years in order to stand in the face of the multiple forms of crimes committed by groups designated as terrorist on the lists of the Security Council, on the top of which Daesh “ISIS” terrorist organization and Jabhat al-Nusra, and the entities associated with them, and the  Judicial and law enforcement institutions make unremitting efforts to ensure respect for human rights when applying their national anti-terrorism legislation, trial and prosecution procedures.