Russian embassy in Washington: US sanctions won’t achieve their goals 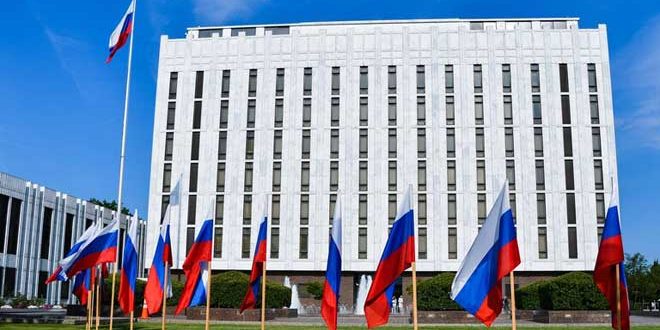 Washington, SANA-The Russian Embassy in Washington has affirmed that imposing new Western sanctions on Russia will be counterproductive and will not allow the American side to achieve its goals, noting that the strength of the Russian ruble currency shows the stability of the financial sector and economy in Russia.

TASS news agency quoted the embassy after the statements made by US officials about possible plans to tighten sanctions against Russia, as saying in a statement “we recommend the ruling circles in America to direct their indefatigable energies to solve the problems in the United States itself.”

The embassy indicated that local officials in the US acknowledge that anti-Russian sanctions in the energy sector would lead to instability in the fuel market and would increase the value of fuel.

The Russian embassy called on the US side to abandon such a futile track, which may be counterproductive, assuring that Russia will continue to implement the tasks set in the special military operation to protect the residents of Donbass.