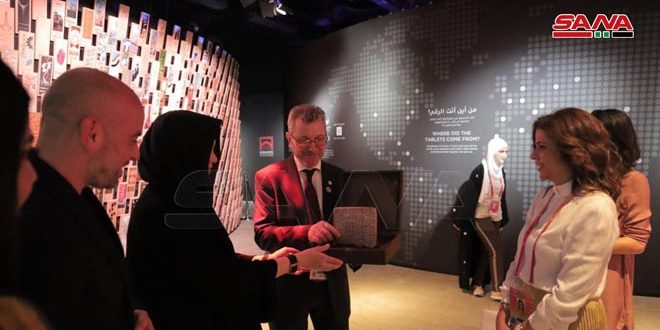 Dubai, SANA- Syrian pavilion at Expo 2020 Dubai continues receiving the guests ,signing agreements aimed at making the most of the Syrian participation at this international exhibition.

An elite of Brazilian businesswomen visited the pavilion and get acquainted with its various sections that include cultural and artistic contents.

During the visit, a charity was launched and a MoU was signed for assisting those in need in Syria with the presence of Syria’s Ambassador in UAE Dr.Ghassan Abbas and the director of the pavilion Eng. Khaled Shamaa.

According to the MoU, the Syrian Arab Red Crescent (SARC) and Syrian Organization for The Disabled (Amal) will choose ten paintings from the art gallery to be printed on cotton shirts ,and then sold in Brazil ,with the proceed will be returned to the needy in Syria.

Meanwhile, Sheikha Latifa bin Mohammed bin Rashid Al Maktoum visited the Syrian pavilion and toured its various sections ,stopping at nikal chant which is considered the oldest musical piece in the world ,voicing her admiration in the way it was presented and her wish that this distinguished experiment would be available on internet to be seen by those who couldn’t attend the pavilion.

On March 29th , the pavilion will organize a concert for Takat Syrian band concerned in reviving the traditional songs from Syria and Arab region ,and this will be the last concert of the artistic events organized by the Syrian pavilion .