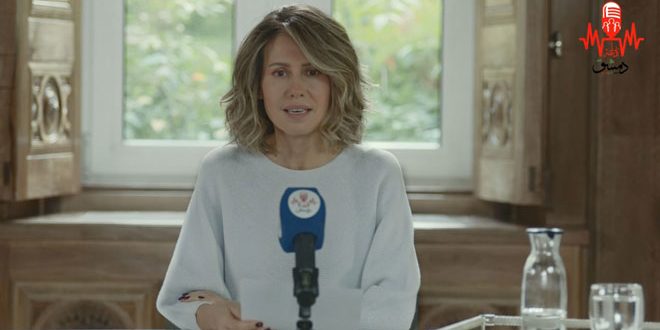 Damascus, SANA- On the occasion of Mother’s Day, Mrs. Asma al-Assad congratulated the Syrian mothers through Damascus Radio , stressing that the mother is the source of giving.

In her speech marking the 75th anniversary of establishing Radio of Damascus, Mrs. Asma said “I’m speaking to you today to congratulate the Syrian women inside and outside the country on the occasion of celebrating those who carried the supreme message.”

Mrs. Asma affirmed that motherhood is the source of goodness and purity, which is the supreme message and the most sacred value.

She added that Syria is the mother of civilizations that have enriched the world with knowledge ,and has been and will continue to carry the message of civilization and humanity no matter how hard the invaders try to occupy and destroy it.

Mrs. Asma said “From Damascus, I chose to address you today through Damascus radio the oldest radio in its name and message, the mother radio on its 75th anniversary, which broadcasted values of belonging to homeland and stood by the brotherly country of Egypt during the aggression against it where the phrase (From Damascus here is Cairo) has become an unforgettable, historical, national Arab slogan.”

Mrs. Asma concluded her speech by saying that on Mother’s Day, we cling to the cycle of life as our mothers and grandmothers clung before. We sow what was burned.. we build what is destroyed.. we defend the earth.. we spread peace and look forward to a bright future, wishing the Syrian mothers a Happy Mother’s Day.