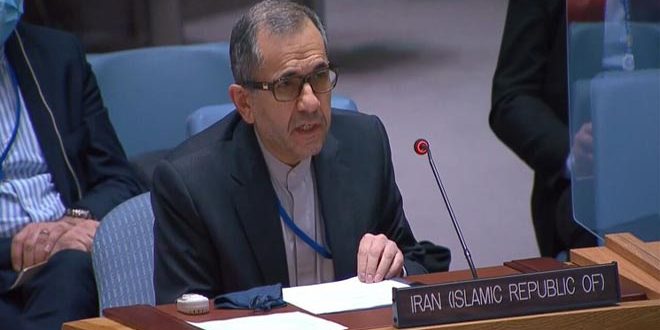 Tehran, SANA- Iran called on the International Community and UN Security Council to condemn the Israeli repeated attacks on Syria, latest of which was that targeted the vicinity of Damascus city, at dawn last Monday, claiming the lives of two people.

Iranian Ambassador and Permanent Representative to the UN, Majid Takht Ravanchi, in a letter addressed to UN Secretary-General and president of UN Security Council, described the Israeli attacks as “criminal and terrorist act”, calling on the international community to slam them firmly.

Earlier, Iranian Foreign Ministry spokesman, Saeed Khatibzadeh, had condemned the Israeli aggression on Syria, saying that two Iranian consultants in Syria had been martyred in the aggression, affirming “this crime would not pass without a response.”