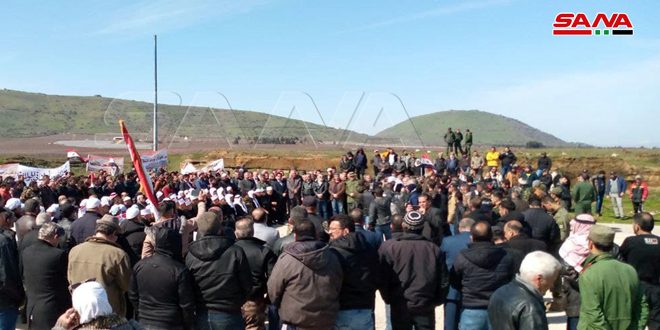 Quneitra, SANA- Locals in Quneitra staged a protest on Monday at the city’s crossing in rejection of provocative measures by the Israeli entity authorities which are represented in interfering in the Syrian domestic affairs.

The participants in the protest, organized by leadership of al-Baath Arab Socialist Party-Quneitra branch and Quneitra governorate, expressed strong resentment towards the hostile practices of the Israeli occupation authorities and their continued failed policy of interfering in Syrian affairs, considering that as an assault on Syrian national sovereignty. The participants also stressed that the occupation authorities are trying to exploit the humanitarian aid file, while at the same time, they are ignoring that what the Syrians’ are passing through of economic blockade and the unjust terrorist war are the outcome of the global Zionist scheme which target the Arab region.

They highlighted the patriotic, national and humanitarian stances of the people of the occupied Syrian Golan, which express the unity of the land and the common destiny.

A protest at Quneitra crossing in rejection of Israeli entity’s acts of aggression 2022-02-28
rafah
Share
Previous Relatively cold weather at night, frost over mountains
Next Salamiyah on Monday 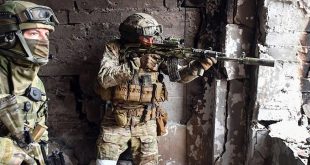 Slutsky announces possibility of a collision between Russia and the West in space Italy: Strikes …