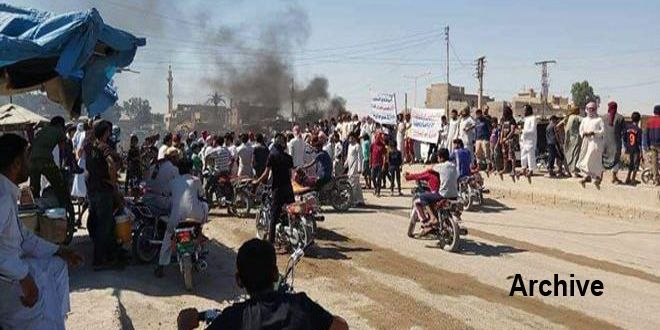 Raqqa ,SANA-A number of civilians were wounded after groups of US backed- QSD militia shot live bullets on a protest against it in al-Sweidia town, Raqqa countryside.

“People of al-Sweidia town protested on Sunday against the suppressive practices of QSD militia, continuous looting of their crops and the region’s capabilities and wealth ,in addition to the insecurity prevailing in the areas they occupy”, local sources said.

The sources added  that “ QSD militants brought in military enforcement and tried to disperse the protesters through shooting fires randomly ,causing injuries among the locals ,some of them in critical medical condition ,with the militia also kidnapping a number of civilians and leading them to unknown destinations”.

2022-01-09
Baraa
Share
Previous A message from President al-Assad to Mauritanian counterpart, conveyed  by Mikdad via phone
Next Do you know that the oldest cuneiform alphabet in history was discovered in Ugarit?