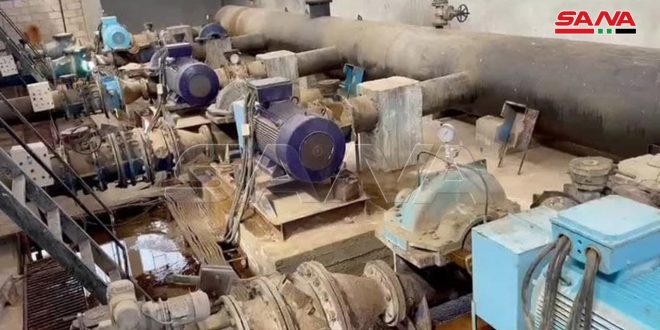 Hasaka, SANA- The reality of the electrical supply of Alouk water pumping station project, which feeds the city of Hasaka and the western countryside of the province, has witnessed stability, which led to the regularity of the project’s work and its production of water.

General Director of the Electricity Company, Eng. Anwar Okleh, stated in a statement to SANA reporter that Alouk pumping project is operating at its normal production capacity after the stability of the electrical supply operating the wells and horizontal pumps.

That was reflected positively on the stability of the reality of pumping water to Hasaka City and the western countryside, according to the rationing program in force by the General Establishment for drinking water, according to Okleh.

Okleh pointed out that the quantities of electricity produced in the province and reaching it amount to 90 megawatts per hour, distributed over 50 megawatts, which are produced in al-Sweidyia generation facility, in addition to 40 megawatts supplied from al-Tabqah Dam, where these quantities are distributed according to the rationing program in force by the company.