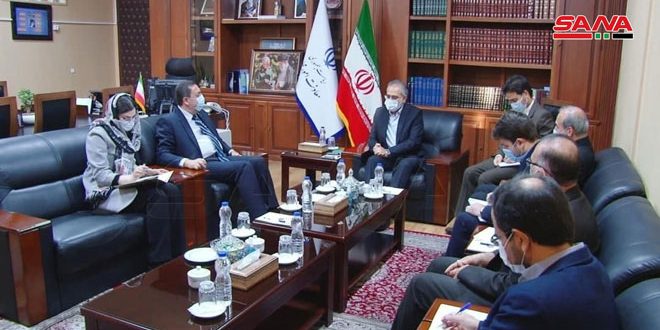 Tehran, SANA- Tehran condemned the repeated Israeli attacks on Syria and called on the International Community to assume its responsibility to stop this aggression.

Seyyed Mohammad Hosseini, Vice-President for Parliamentary Affairs who met the Syrian Ambassador in Tehran, Shafiq Dayoub, denounced the US aggression on parts of the Syrian territory and looting the country’s natural resources, calling for US withdrawal from Syria, Iraq and other countries.

He affirmed Iran’s full readiness to contribute to reconstructing what has been damaged by the terrorist war in Syria, hailing the exhibition of Iranian products which was held recently in Damascus, saying that Iran is seriously determined to cooperate with neighboring countries, particularly Syria.

In turn, Ambassador Dayoub underlined the necessity of boosting cooperation in the scientific, tourism, technical and technological fields, stressing the important role of both countries’ parliaments in set laws that play a major role in pushing the process of strategic cooperation forward.