The Turkish occupation mercenaries of the so-called “al-Sham legion” have dismantled the silos in al-Manajir village, Ras al-Ayn area, and they stole its equipment, and extracted the copper from the generators to transfer it to Turkey and sell it to Turkish brokers, local sources told SANA reporter.

In a relevant context, over the past hours, terrorists of the so-called “Sultan Murad”, “Ahrar al-Sham” and “Jaish al-Islam” have cut down olive trees in the villages of Qartaqlaq and Qastal Miqdad to trade in their wood, and they sold a number of citizens’ houses in al-Mahmoudiya and al-Ashrafiyeh neighborhoods in Afrin city and Raju township, Aleppo northern countryside.

Terrorist organizations affiliated with the Turkish regime have previously dismantled and plundered hundreds of factories and power stations in Aleppo and Idleb through Turkish experts, and they smuggled them to Turkish territory, in addition to robbing the public and private property after forcing their owners to leave them by force. 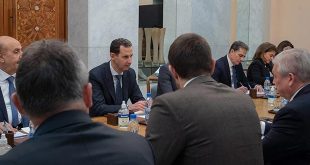