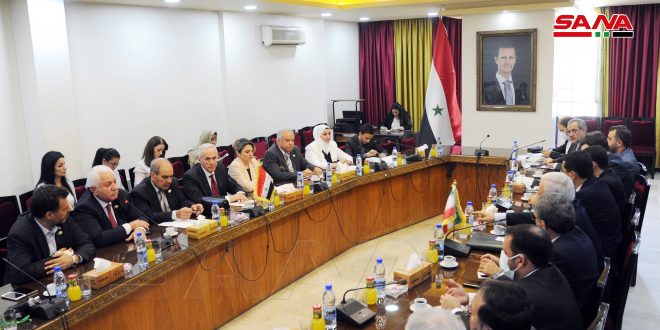 Damascus, SANA- The offices of the “Arab, Foreign, and Expatriates Affairs”, “National Security” and “Syrian-Iranian Friendship” committees at People’s Assembly discussed with Chairman of Iranian Parliament National Security and Foreign Policy Commission Vahid Jalalzadeh and an accompanying delegation means of boosting and developing parliamentary relations between the two countries. During their meeting, members of the committees stressed the need for enhancing cooperation between Syria and Iran at all levels and coordination on issues of common interest to face the economic blockade.

Members of the committees hailed the political and economic support provided by Iran to Syria in the face of the unilateral coercive economic measures imposed on the Syrian people.

For his part, Zadeh and the accompanying delegation said that that the aim of the mutual visits is to consolidate relations and push them forwards, coordinate and cooperate to serve the interests of the two friendly countries and peoples.

2021-07-29
m.eyon
Share
Previous Hind Zaza: President al-Assad’s phone call will light up my way towards crowning podiums
Next Ambassador Haddad: Boosting cooperation between Russia and countries of the Islamic world