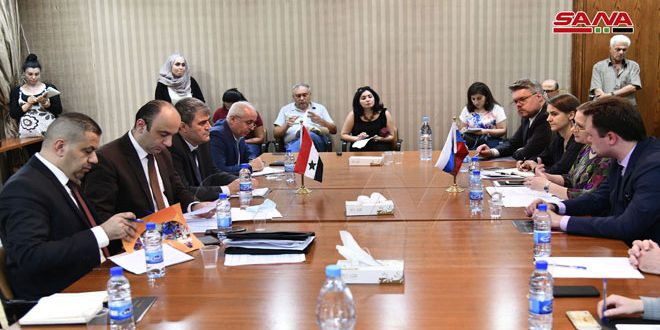 Damascus, SANA- Activities of the second day of the Syrian-Russian joint meeting to follow up works of the International Conference on the Return of Syrian Refugees, who were forced to leave the country by terrorism, resumed on Tuesday at the Conferences’ Palace in Damascus.

Representatives from the Justice Ministry in Syria and Federal Russia discussed draft agreements between the two countries through three laws to be approved and signed.

A meeting was held between representatives of Syrian and Russian Education Ministries in addition to representatives of Moscow State Pedagogical University with the aim of developing the methods of teaching the Russian language within the framework agreement signed between the two countries.

Meanwhile, the meeting which brought together a delegation from Information Ministry and establishments affiliated to it with a delegation from Russian Ministry of Digital Development, Communications and Mass Media concentrated on developing cooperation between media outlets in the two countries and domains of enhancing it.

Two delegations from the Ministry of Emergency Situations of Russian Federation and the Syrian Civil Defense discussed the terms of memorandum of understanding to be signed between the two sides and the suggested amendments to contribute to raising the work of civil defense, emergency, rescuing, ambulance, fire and training.

2021-07-27
m.eyon
Share
Previous Citizens of Khirbet al-Thiaba in Qamishli countryside prevent armored vehicles of US occupation from entering their village
Next Arnous: Necessity of establishing companies of renewable energy production to secure electricity to industrial cities