Mikdad: Arab people should support their brothers in Syria 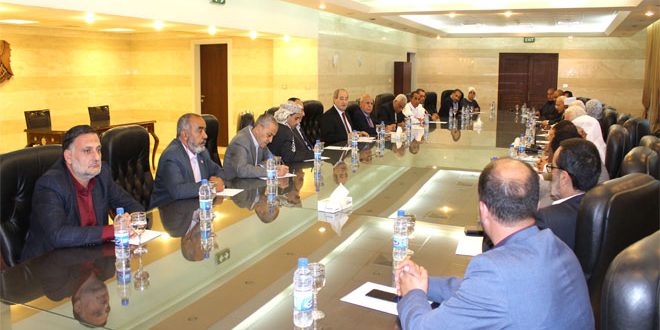 Minister Mikdad briefed the delegation on the hard conditions Syria has passed through during the 10-year terrorist war launched by Western states and their agents, referring that Syria’s stance in support for issues of the Arab Nation, on top the Palestinian Cause, is one the most significant reasons that stand behind the conspiring scheme against it.

Mikdad also talked about the circumstances in the Arab region, stressing the necessity for Arab people to support their brothers in Syria and other Arab countries against the western economic sanctions aiming at subjugating them to the US and Zionist hegemony.

The Minister added that the large participation of Syrian people in the Presidential election recently held inside the country and abroad through the Syrian embassies was a vivid example of Syrians’ adherence to their choice to overcome all those who tried to intervene to divert their course and struggle.

In turn, members of the delegation expressed their deep solidarity with the Syrian people to overcome the challenges they have been passing through because of the terrorist war against Syria, referring to the resilience shown by Syrians under the leadership of President Bashar al-Assad.

They also reiterated their solidarity with Syria in the face of all unilateral economic measures imposed on the country by the US , western and European countries.