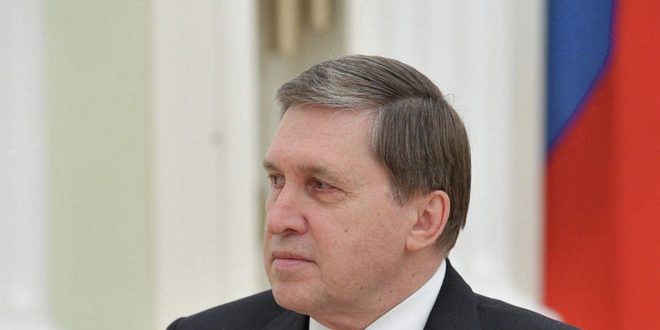 Moscow, SANA- Russian President’s Assistant, Yuri Ushakov, said that Russian President, Vladimir Putin will discuss with his US counterpart Joe Biden, during a summit scheduled to be held on Wednesday in Geneva, the situation in Syria, Libya and Afghanistan, in addition to several other issues.

Commenting on the meeting’s agenda, Sputnik quoted Ushakov as saying that “the two sides will discuss the status and prospects for developing Russian-American relations, issues of strategic stability, information security, the fight against cybercrime, in addition to the prospects for trade and investment cooperation, combating the novel coronavirus and many other issues.”

Ushakov noted that the regional issues will be left to the end, as they will particularly discuss the issues of the Middle east and the situations in Syria, Libya, Afghanistan, Korean Peninsula and Ukraine, in addition to the nuclear deal signed by Iran and the P5+1 group,  and a special attention will be paid to Nagorno-Karabakh and the situation in Belarus.

Ushakov pointed out that there will be a great focus on strategic stability due to the accumulation of many serious problems in this field in recent years due to a number of unilateral steps taken by the United States.

The summit between Presidents Putin and Biden is scheduled to be held in Geneva, Switzerland, on June 16, and this will be their first meeting since the inauguration of Biden as President of the US early this year.

2021-06-15
rafah
Share
Previous 340 companies participate in 7th session of the exhibition on information and communication technology (Syria Hi-Tech)
Next Two civilians injured as QSD militia open fire on them in al-Dirbasyia, Hasaka Countryside