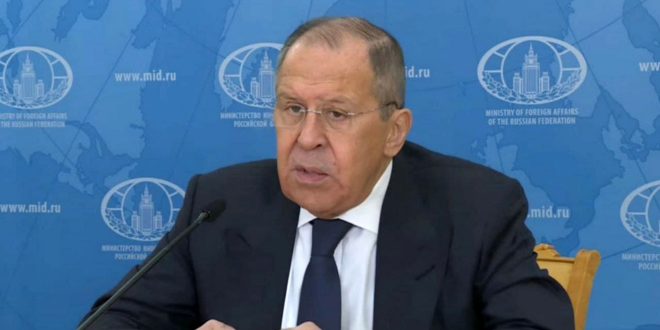 Moscow, SANA-Russian Foreign Minister, Sergey Lavrov said that the US occupation forces continue to plunder the Syrian wealth extensively, and they use the looted money for supporting militias in Syria.

Sputnik News Agency quoted Lavrov, on Wednesday at Primakov Readings Forum, as saying “We every time affirm the illegitimacy and unlawfulness of the US presence on the Syrian territories, which is accompanied with plundering the natural resources such as the oil fields and agricultural crops.”

He went on saying that the Americans support separatist bodies on the eastern bank of the Euphrates river with the looted money, noting that they play a really dangerous game which may end badly.

On a daily basis, the US occupation, in collusion with QSD militia, continue plundering and looting the Syrian wealth and they transfer it through the illegitimate border crossings which they use for their movements in a flagrant violation of the international legitimacy and the UN resolutions.

Minister Lavrov affirmed that Russia will continue to contribute to resolving international conflicts, indicating in this regard to his country’s efforts to resolve the Palestinian- Israeli conflict, in addition to resolving the conflict in Nagorno-Karabakh between Armenia and Azerbaijan and the conflicts in Afghanistan and Libya and in other hotspots.

On the other hand, Lavrov stressed that sanctions and threats are useless while talking with Russia, noting that Moscow’s desire for dialogue should not be understood as weakness.