Al-Jaafari calls for dealing with situation in Syria through objective, true way 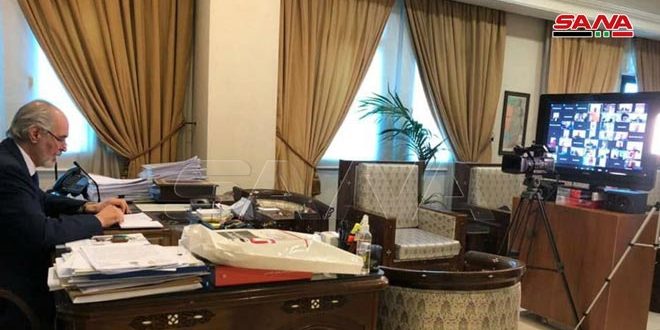 Damascus, SANA-Deputy Foreign and expatriates Minister, Bashar al-Jaafari, called for removing illegitimate western economic measures imposed on Syria and “reading the situation in the country with true and objective way instead of adopting stances that prolong the span of crisis and increasing chaos and terrorism.”

“The economic, financial terrorism being practiced against Syria today was not only embodied through the unilateral economic measures imposed by the US and EU, but it has started since the first days of the terrorist war waged on Syria,” al-Jaafari said in a speech via video during “the Arab-International Forum to lift blockade and cancel sanctions against Syria” in Beirut.

He added that the coercive measures represent a clear image about the political hypocrisy being practiced by some states, as they claim “their commitment to the Syrian people,” while they violate Syria’s sovereignty and link any assistance in the field of development or infrastructure to political preconditions.

Al-Jaafari went on to say that the US, Britain, France and other countries have used all their capabilities to target Syria and to liquidate their old and new accounts in addition to achieve their special agendas.

“What is wanted toady is an immediate halt to the rude intervention in Syria’s domestic affairs and the end of the unjust and illegitimate measures in addition to reading the situation in the country with true and objective manner,” al-Jaafari concluded.