Homs, SANA- Health sector in Homs province has managed to gradually recover after being systematically affected by destruction and sabotage due to terrorism which destroyed the hospitals and health centers and plundered the medical equipment, tools and medicines.

After the province has restored stability due to the efforts of the Syrian Arab Army, the recovery stage has started through rehabilitating and restoring the damaged facilities in all areas.

Director of Homs Health Department Dr.Msallam Atassi told SANA reporter in a statement that the rate of the damage affected the health sector during the war reached 60 percent when some health facilities went out of service due to the destruction and looting the medical equipment, which necessitates to resort to the existing facilities, supporting them and offering medical services for the citizens.

Dr. al-Atassi pointed out that the number of the health centers and clinics in the province before the crisis reached 222 health centers, asserting that most of the hospitals, whose number has reached 16 ones went out of service of which 11 have returned to service

He indicated that the recovery rate in the health sector has exceeded 75 percent, asserting that work is underway to rehabilitate all health centers in cooperation with international organizations.

He stressed that the rate of restoration works have reached 61 percent, and that the Health Department is following its plan to reconstructing and raising the readiness of its hospitals.

health sector Homs 2021-02-24
hala
Share
Previous US occupation helicopters transport shoulder-fired missiles and shells to its base in Hasaka countryside
Next Mikdad: Some countries exploit Conference on Disarmament to liquidate accounts against countries that do not share their hostile policies 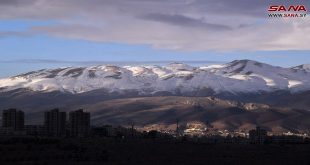