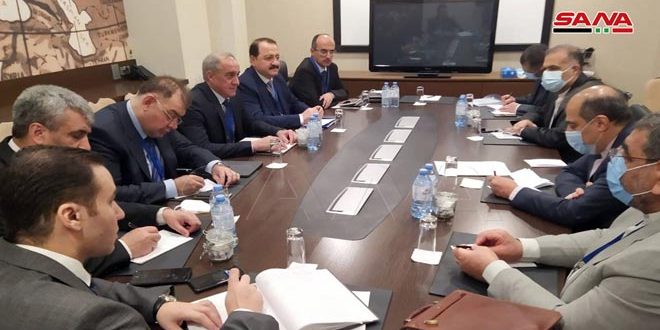 Sochi, SANA-The Syrian Arab Republic delegation, headed by Assistant Foreign and Expatriates Minister, Dr. Ayman Sousan, on Wednesday held a meeting with the Iranian delegation headed by Senior Aide of the Iranian Foreign Minister for Special Political Affairs Ali Asghar Khaji in the framework of the 15th International Meeting within Astana Format, held in the Russian City of Sochi.

The two sides reviewed activities of the 15th meeting of Astana track and the situations in Syria, as there was a convergence in the viewpoints over the importance of continuing mutual work in various fields, especially combating terrorism till eliminating it from all the Syrian territories.

Both sides affirmed the international community’s responsibility to stop the policy of imposing unilateral coercive measures by some Western countries that target the peoples, in addition to the necessity of not politicizing the file of humanitarian aid, and not allowing the access of aid to the terrorist organizations.

With regard to the political process, the two sides underlined the importance of respecting the referential rules of this process, especially refusing any foreign intervention in its work, or setting any artificial timetables. Earlier on Tuesday, Sousan met a Russian delegation headed by Russian President’s Special Envoy for Syria Alexander Lavrentiev as both sides agreed on the importance of continuing the work in the framework of Astana process.

Sousan had also met the UN Secretary-General Special Envoy for Syria Geir Pedersen as the two sides discussed the situation in Syria.

The 15th International Meeting on Syria within Astana Format started activities on Tuesday in the Russian Sochi Resort at the Black Sea coast with the participation of the Syrian Arab Republic delegation, in addition to the delegations of the guarantor states of Astana Process, and representatives of the countries that enjoy the observer status in the Astana process, namely Iraq, Lebanon and Jordan as well as the delegation of the United Nations headed by Pedersen.