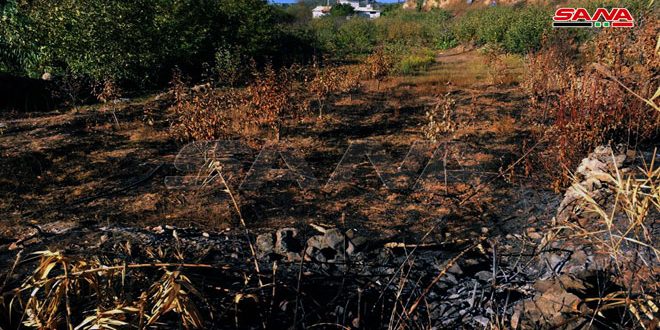 Homs, SANA- Locals of the villages of Eyoun al-Wadi and al-Joweikhat in Homs countryside whom lands and crops were destroyed by the fires showed firm determination on reviving their damaged land and re-cultivating every inch of them.

The locals said that the fires, which were erupted in a number of areas in Homs western countryside, have devoured many areas, which entailed exerting more efforts by the civil defense and firefighting teams and the locals to extinguish the fires and prevent their spreading.

A farmer from al-Joweikhat village said that 18 dunums of his agricultural lands which were cultivated with apple trees have been damaged by fires, asserting that he lost 300 apple trees completely.

In the village of Eyoun al-Wadi, the locals said that they intended to clean their lands and re-cultivating them with apple, peach, walnuts and olive trees, calling for supporting the farmers to re-cultivate their lands and provide the needed help.

For his part, head of agriculture society in Eyoun al-Wadi Gerges Qastoun said that the lands of 17 farmers of the village were severely affected by the fires, in addition to the large damage affected the forestry land within the village which is considered one of the tourist destinations in Homs province.