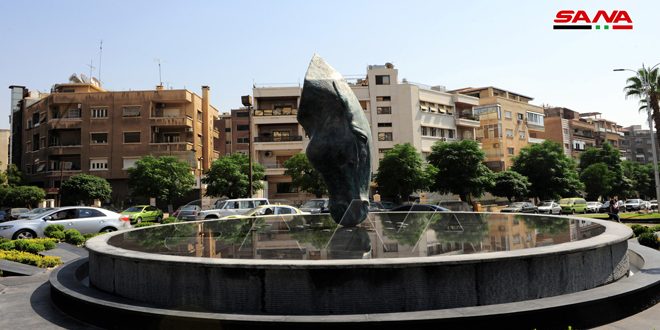 Damascus, SANA_ In one of the Damascene Squares, a new sculpture of an Arabian horse quenching his thirst from Fijah water is erected overlooking the quarters of the oldest inhabited capital in the world.

The four-meter-high sculpture, which was amalgamated with the spirit of the Orient, was created by the Syrian sculptor Hussam Jannood in his simple studio. With his simple tools, Jannood managed to achieve a unique sculptural work in a clever way that left an attractive impression to the spectators.

The sculptor, in a statement to SANA, said that he chose the Arabian horse to be the theme of his sculpture because it symbolizes our great history, Arab identity and our steadfastness and pride.

“The theme and time of this work symbolize our will and ability to face the difficult circumstances we are going through,” Jannood said.

He also talked about the difficulties which he faced to complete this work. For this reason, he divided the work into several stages since his small studio wasn’t qualified to implement such a sculpture at this value.

Some specialists and critics in plastic arts saw in this work the spirit of the East. The famous artist Sohail Baddour described Jannood’s sculpture as a great work that was carefully done.

The horse sculpture was not the first work of Jannood in the framework of the art of street. He previously carried out a sculptural work in Jadidat Artouz for the heroic Syrian soldier who sacrificed his soul in defense of the homeland.

Jannood is currently working on another sculptural work that addresses the theme of the war on Syria and the steadfastness of Syrian women and their role in bringing up a generation adhering to resistance and steadfastness.

This new sculpture consists of a woman who embraces a 10-year-old boy and pushes him forward into a rocky base that symbolizes the difficult reality in which we live and with her insistence on firmness and resistance.