With notable decline in number of coronavirus patients admitted to hospitals…Have we passed the peak …? 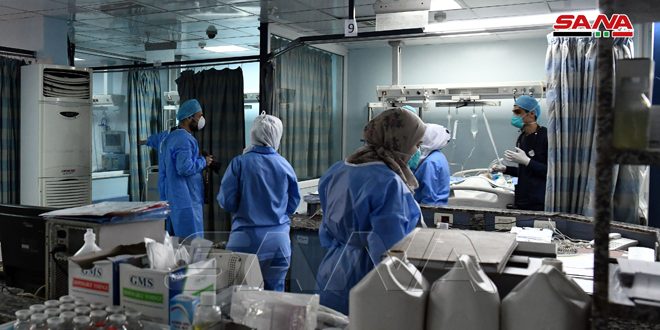 Damascus, SANA- Recently, there has been a lot of talk about the decrease in the number of patients suspected of being infected with the coronavirus at the hospitals, which has led many to conclude and say that the outbreak of the disease in Syria has reached the peak and the virus has begun to recede, so, do the numbers confirm the validity of this conclusion and how did the doctors and specialists explain the issue?

The General Director of the Mouwasat University Hospital in Damascus, Dr. Issam Zakariya al-Amin, told SANA’s correspondent that since late August and early September, the number of severe and critical cases infected with Coronavirus, which have been admitted to the hospitals, decreased by 30 percent compared to last July, which witnessed a remarkable increase and the curve of infections became vertical and upward as there was an increase on a daily basis, indicating that the current decrease in numbers of coronavirus infections was preceded by a flattening of the curve.

The decrease in the number of critical and acute coronavirus cases has been translated through the lower rate of hospital admissions for Coronavirus patients, in the departments of the reception, isolation and intensive care units (ICU), according to Dr. al-Amin who indicated that the rate of the admissions of the coronavirus patients to the hospitals in the aforementioned departments in which the number of beds amounted to 115, reached a hundred percent during the month of July, while the pressure has now decreased significantly and there is an availability in the beds.

Dr. Al-Amin attributed the noticeable decline in a number of coronavirus cases in Damascus hospitals to the citizens ’commitment to preventive measures broadly than before, in addition to the fact that the nature of viral epidemics, including Coronavirus, begins with a spread phase, then a peak and then a decline.

He stressed that it is difficult to expect if there will be another peak of the virus spread because it is new and studies are still ongoing about it, and most of them have emphasized that we can live with the virus for years, so adherence to individual preventive measures is the best solution to prevent any new attack or spread of the virus.

By tracking the numbers of officially registered cases announced by the Ministry of Health, it is noticed that the number of registered cases in Damascus and its countryside has decreased during the past days from ninety percent to 35 percent, according to Dr. Al-Amin, while the number of cases has increased in other provinces, pointing out that the death rate among the infected cases that have been admitted to al-Mouwasat Hospital reached 3%, which is identical to the global percentage.

A number of pneumologist and specialists in Damascus and its countryside also confirmed the decrease in the number of visitors to their private clinics with a suspected case of coronavirus infection, according to Dr. Ibrahim, explaining … “Our colleagues of pneumologist confirmed to us that out of every ten patients who visit their clinics there were 8 suspected cases of coronavirus infection, but now the number has become a case or two out of ten.

The reasons for the decline in the number of admissions of coronavirus cases to the hospital, according to Dr. Ibrahim, may be due to the decline in the virulence of the virus or the occurrence of a type of immunity, according to what some scientific studies have spoken, but he considered that the main reason locally is an increase in commitment to individual prevention measures.

On  the possibility of a new virulence of the virus as some speak, Dr. Ibrahim explained that according to the opinion of the scientific committee on coronavirus in the hospital, this cannot be resolved because it is a novel virus, pointing out that even the symptoms still witness a difference as the digestive symptoms have become more common among the auditors, reaching the proportion of one-third of the patients while chest symptoms still reach 70 percent of the cases, and a considerable number of patients complain of symptoms of loss of smell and taste, and these changes are not only local, but also worldwide.

On the other hand, the number of patients suspected of being infected with the Coronavirus increased at the hospitals in Lattakia province, as Dr. Siham Makhoul, Director of the Martyr Hamza Nofal Hospital in Lattakia, confirmed in a statement to SANA that it cannot be said that the curve of the virus outbreak has decreased, considering that the increase or decrease in the number of infections is related to the extent of adhering to the prevention methods, social distancing, wearing masks in the crowded places, and abandoning the prevailing social customs such as shaking hands, hugging and kissing.

According to Dr. Makhoul, the reason behind the increase in cases in Lattakia is due to the large movement which the province has witnessed during the holidays and the arrival of many from other provinces, which had a role in the increase in the coronavirus outbreak.

Meanwhile in Aleppo Province, the numbers of Coronavirus infections are still at their peak according to the opinion of a number of specialized doctors in the province hospitals. However, the symptoms of the disease are generally mild and varied between high fever, chest infections, diarrhea and weakness in general.

Dr. Ziyad Hajj Taha, Head of Aleppo Health Directorate, said in a statement to SANA that the emergency department at al-Razi Hospital in Aleppo received on a daily basis during the month of August more than 200 patients per day, of whom between 80 and 90 patients were suspected cases of coronavirus, but with the beginning of this month, a decrease in the number of those who are suspected of being infected with the virus, to between 40 and 60 percent.

Despite the recent increase in the number of coronavirus infections in Aleppo, the rate of admissions to the hospitals has decreased from 100 percent to 50 percent because the cases are mild and can be followed up at home. As for the patients who need a mechanical ventilator, they are received within the hospitals, according to Dr. Hajj Taha.

He pointed out that the hospitals of al-Razi, Ibn Khaldoun and Zahi Azraq and the private hospitals are still receiving cases of coronavirus cases, and certain sections of them have been allocated for isolation and providing the necessary health care for the patients.

With the difference in the decline or increase in cases of infection in various provinces, the emphasis on the need to adhere to preventive and precautionary measures, according to the opinion of specialists, is the only way to limit the outbreak of the virus and prevent the emergence of a new “virulence or attack” for it.