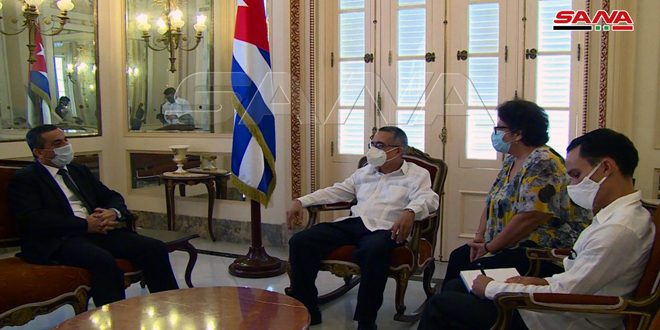 Havana, SANA- First Deputy Minister of Foreign Affairs of the Republic of Cuba Marcelino Medina said that Syria is an example of steadfastness and resistance, expressing confidence that Syria will overcome all challenges facing it.

During a meeting with Syrian Ambassador in Cuba Idris Mia in Havana, Medina expressed, on the occasion of the 55th anniversary of the foundation of the Syrian-Cuban diplomatic relations, his pride in the distinguished and deep rooted relations linking the two countries.

He expressed appreciation over the victories achieved by the Syrian Arab Army and his sacrifices in facing the terrorist organizations, hailing the courageous leadership of President Bashar al-Assad.

For his part, Mia stressed that Syria and Cuba have managed over a long time that have extended for half a century to establish significant relations, asserting that the current situations and the joint challenges necessitate to enhance bilateral relations in all domains, particularly in the economic field to serve the interests of the two countries.

The Syrian Ambassador expressed high appreciation over Cuba’s supportive stances towards Syria in facing the conspiracy, particularly in the international forums and organizations, renewing Syria’s stance towards Cuba in facing the US unfair blockade.
Hala Zain