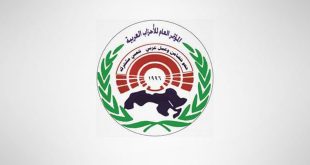 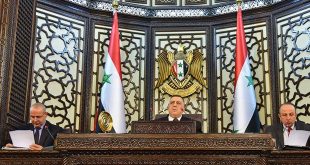 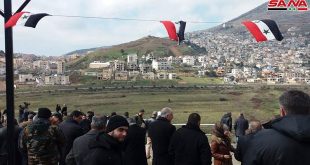 On 38th anniversary of annexation decision, occupied Golan will ever remain Syrian

The Hague, SANA- Permanent Representative of Syria at the Organization for the Prohibition of Chemical Weapons (OPCW), Ambassador Bassam al-Sabbagh said that Syria sees a decision adopted by the executive council of OPCW on alleged use of chemical weapon in al-Latamina area in Hama in March, 2017, as a politicized decision where it targets a member state of the organization and a party to the Chemical Weapons Convention in order to achieve known political goals and agendas.

al-Sabbagh said after a vote in the executive council during its 94th session that this decision was made relaying on disinformation, and based on false and misleading conclusions of a team that was illegally established and contrary to the provisions of the convention.

Sabbagh indicated that this decision will encourage terrorist groups to stage more fabricated chemical plays to accuse the Syrian Arab Army instead of seeking to mobilize international efforts aimed at facing and eradicating these groups and restoring safety and security to Syria.

He warned that the decision will increase the severity of the division between the member states and push for more polarization, which will ultimately weaken this organization and its role.

al-Sabbagh added that the decision will also give the US , Britain and France new pretexts to commit more acts of aggression against Syria, and shed the Syrian innocent blood as a result of practicing this aggressive policy.

al-Sabbagh thanked the countries which have not supported the decision and rejected all forms of pressure and blackmail practiced against them in order to protect the organization and implement the convention.

The Executive Council (EC) of OPCW on Thursday vote a Western draft decision endorsing the findings of the so -called Investigation and Identification Team (IIT) on three alleged incidents about the use of chemical weapons in al-Latamina area in Hama on March, 2017.