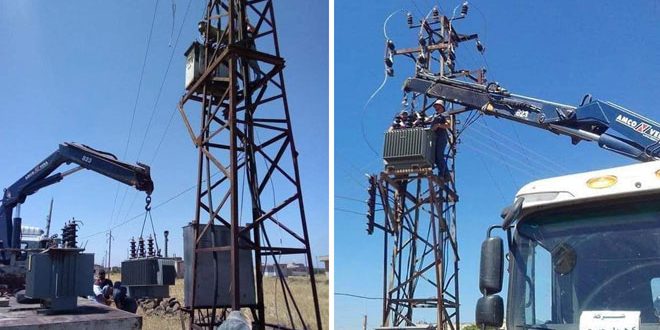 Homs, SANA- The General Company of Homs Electricity’s workshops have completed the rehabilitation of the electrical system in the villages of Jwalak and Snesail in Homs northern countryside, which had been sabotaged by terrorist organizations.

Engineer Musleh al-Hassan, Director of Homs General Company for Electricity, said in a statement to SANA reporter that the rehabilitation process included low and medium voltage electricity networks and transmission centers as an electricity transmission center was installed in each village with a capacity of 200 kVA.

He added that the electricity supply to the families living in these two villages was thus secured, pointing to the role of joint efforts between Homs General Company for Electricity, the Syrian Arab Red Crescent, the International Committee of the Red Cross and popular activities to support and secure the electricity network.

A number of residents expressed their satisfaction with the return electricity to their villages and its positive impact on several sectors, the most important of which is agriculture.