Archbishop Hanna: “Caesar Act” horrific crime that must be confronted 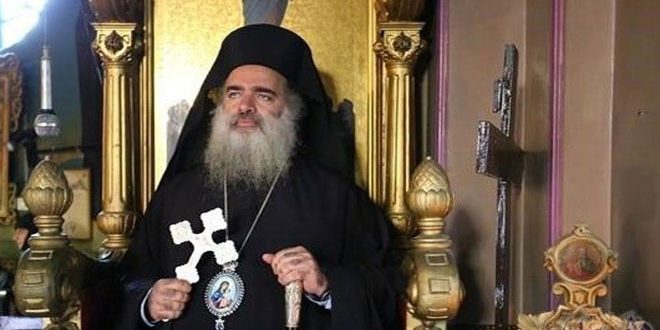 Occupied Jerusalem, Beirut, SANA- Greek Orthodox Archbishop of Sebastia Atallah Hanna affirmed that the so-called “Caesar Act” is a is a horrific crime committed before the eyes of the world and no one lifts a finger, stressing that this unjust act must be confronted.

While meeting a delegation from people of the occupied Syrian Golan, Archbishop Hanna called on the conscientious people in the religious, legal and humanitarian domains all around the world to work on foiling this racial and inhuman act.

Archbishop Hanna said “From Jerusalem, we send a message of solidarity with our people in the occupied Syrian Golan and with all the Syrian people who are targeted by this act.”

The Islamic Action Front in Lebanon, for its part, considered that the US coercive measures on Syria and imposing the so-called “Caesar Act” come in completion of the terrorist war waged against the country.

In a statement on Wednesday, the Front said “There is a global fierce attack led by the evil US administration and the Zionist entity against the resistance axis and the Arab people in Syria, Lebanon and Iraq who reject to be subjugated to the dictations and conditions of the Zionist-US devil axis.”

The statement affirmed that Caesar racial act completes the conspiracy of the “Deal of the Century” which seeks to liquidate the Palestinian Cause.