Protests against practices of Qasad groups in al-Shadadi, Hasaka countryside 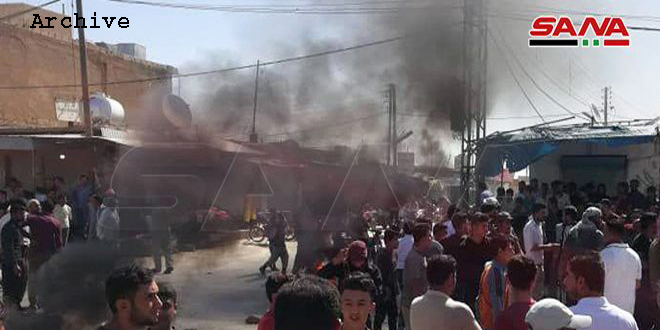 Hasaka, SANA- Locals in al-Shadadi City in Hasaka southern countryside on Thursday protested against practices of US occupation-backed Qasad “SDF” groups, and in condemnation of their repressive practices against them.

Local sources said that locals in al-Shadadi City protested against practices of US occupation-backed Qasad groups after the spread of chaos, kidnapping, killing and monopolization and other brutal practices against the locals.

The sources added that the protestors cut the main roads in the city with tires, chanting slogans in condemnation of Qasad practices against the locals.

It is noteworthy that over the past few months, locals in Hasaka and Deir Ezzor have organized many protests in condemnation of Qasad groups’ practices as Qasad have always been dispersing the protestors through opening live bullets on them as a number of them have been martyred and others have been injured.

The Hague, SANA- Permanent Representative of Syria at the Organization for the Prohibition of Chemical …