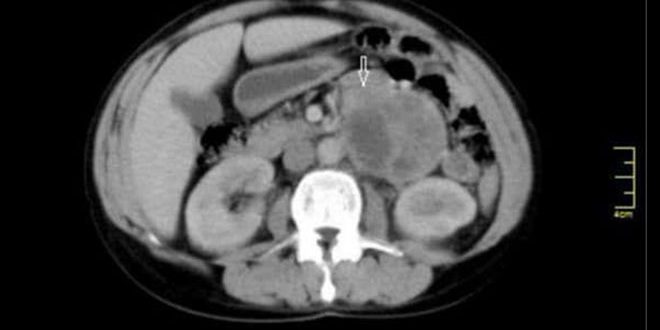 Tartous, SANA_ A new unique surgery is registered for the health sector in Syria in general and for the medical staff in Al-Basel Hospital in the coastal province of Tartous in particular.

Surgeon Shawky Mahmoud, who performed the operation with the help of a specialized medical staff, gave a detailed explanation of this case.

A 41- year- old lady presented with mild left flank discomfort. She had experienced recurrent anxiety attacks accompanied by palpitations and headache which were managed previously as panic attacks.

Radiologic investigations showed a retroperitoneal mass that located anteromedial to the left kidney, separated from the left adrenal gland and adherent to the 4th duodenal segment, he explained.

Upper gastrointestinal endoscopy failed to pass beyond the 3th duodenal segment and showed no pathologic evidence. According to her findings, a diagnosis of duodenal gastrointestinal stromal tumor (GIST) was suspected.

During laparotomy, crises of hypertension and tachycardia followed by severe hypotension made the resection of the misdiagnosed mass very tricky.

Paraganglioma is a life threatening disease and should always be considered as a differential diagnosis of asymptomatic retroperitoneal mass.

The aim of our study is to present a challenging case of an undiagnosed retroperitoneal paraganglioma and to alarm our colleagues from such troubles.

The surgery lasted for about five and a half hours, according to the Surgeon Mahmoud, noting to the serious complications that accompanied the work of medical team due to hypertensive crisis followed by hypotension and cardiac arrhythmia as a result of contact with the tumor mass.

He added that this necessitated performing the operation without touching the tumor.

2000 ml of blood lost and six blood units were transfused to the patient during the surgery, Dr. Mahmoud said.

He said that this surgery is qualitative, rare and very dangerous and we wanted to share it at a high level locally and globally.

It is the fourth time that a medical research by the hospital staff has been published in the most important international scientific journals.

Despite the economic blockade and the limited capabilities available, we were able to perform a qualitative and rare surgery, Dr. Mahmoud said.

Director of the General Authority for Al-Basil Hospital, Dr. Iskandar Ammar, confirmed that several scientific researchers have been published in the name of  Al-Basil hospital in Tartous at the world level, the most recent of which was in the aforementioned British magazine. 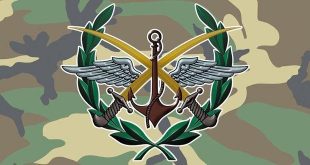 Damascus, SANA_ The Syrian Arab Army on Saturday received the second group of modern and …