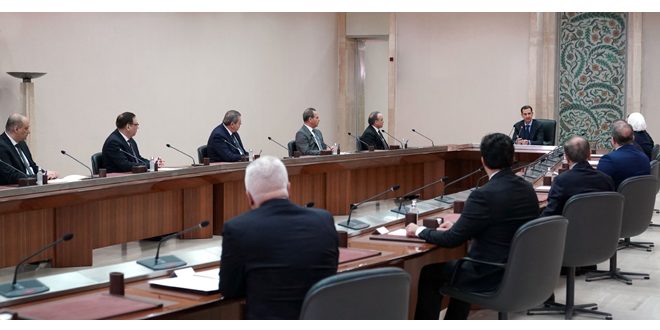 President al-Assad said that this meeting comes after several weeks of applying the precautionary measures and several months of the pandemic’s spread and its deep and clear effects that accelerate rapidly, particularly since there is no tangible sign of anything for confronting this pandemic. 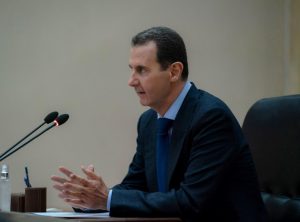 His Excellency said that regarding the situation in Syria, we quickly and immediately carried out a calculated series of procedures to protect citizens, including imposing a partial curfew across the country. The response and awareness of citizens, in addition to the swift actions of the state, played a main role in slowing the spread of the Coronavirus.

The President noted that these procedures had several negative elements, primarily in the economic side, as the burdens of life increased for citizens. When it became clear that the Coronavirus pandemic is not a passing thing, it was necessary to work towards restoring normal life to relieve the unprecedented pressure that citizens have experienced during this stage, but under regulations set by the government on one side, and with the citizens assuming responsibility for protecting themselves in their daily routine on the other side.

The president clarified that the most important measure adopted in Syria was to set a part-time curfew which aims to not only protecting citizens, but also to let the opportunity for the potential, hidden cases to occur, the cases that carry the infection.

President al-Assad added “So, when the pandemic seemed that it is not a temporal issue, it was inevitable to start a gradual returning towards the normal life to ease the unrepresented pressure on citizens, and a big number of officials in the world announced that we have nothing now except the option of adapting with the existence of that pandemic.”

The president went on to say that concerning the procedures, we want openness, but a controlled openness, which means that the citizen should assume part of the responsibility. Previously, the state assumed those measures to protect the citizen, but now, when we start openness, the biggest responsibility will be put on citizen through the daily individual behavior and we should put regulations and then should observe them, and we will go towards adopting flexible procedures.

President al-Assad said that along with the health challenge, there is also the economic challenge which we face after a constant war for over nine years and an unjust embargo on the people, with the Coronavirus pandemic coming to create a state of global economic self-isolation and recession.

His Excellency said that in addition to all that, there are some greedy individuals who exploited this pandemic and created a state of monopoly to make ludicrous earning at the expense of citizens by raising prices.

President al-Assad said that the preceding issues and challenges don’t mean that we are unable to do anything; rather there are several procedures that the government can carry out to make a positive impact on citizens’ lives and provide their needs, the most important being finding a solution for the disparity between the prices of locally-produced food crops for farmers and citizens, and that can be done if the middlemen are removed and if the state becomes a main player in the market, which would lead to reducing prices via the public sector’s economic establishments, mainly the Syrian Trading company which must play the role of the main trader but in the interest of the citizens.

President al-Assad stressed that the majority of the citizen’s complaints were related to the local materials, and here would be the question or the challenge in front of us, which is why there is a big difference between the price of the farmer and the price presented to the consumer, and I believe that the answer is obvious, which is to break the mediator chains between the farmer and the consumer.

His Excellency said that opening marketplaces for farmers to sell their products directly to citizens in cities, which has happened in several areas recently, in addition to curbing transgressions and increasing penalties for those who manipulate prices and bills and trade in subsidized goods, will create a deterrent against the greed of some merchants and manipulators who exploit citizens’ needs, stressing the need for the local communities to participate with the relevant establishments to monitor the regulation of prices.

President al-Assad said the government must be more dynamic in dealing with these issues and act in a quick yet calculated manner to bolster the role of the public sector establishments, whether by grating them the necessary authority or changing their bylaws, so that these establishments can be more flexible and capable of positive intervention, which would have quick positive results and impact on citizens as soon as possible.

He added that If we were able to realize short outcomes, which means the price of the peasant with calculating the profits, I believe that we would end the basic problem of prices, the other factor remains which is the purchasing capacity.

“So, there should be an immediate proposal to everything related to the prices… the issue of putting bills, the subject of cheating, trafficking with the supported materials, there should be decisive and hard penalties for this matter,” the President said.

Afterwards, President al-Assad listened to the team members’ opinions and interpositions, discussing mechanisms and procedures for reducing prices, with President al-Assad calling on the team members to present suggestions in this regard and to quickly draft or revise laws related to imposing stricter penalties against merchants who commit transgressions or monopolies.

The discussions also touched on the precautionary measures that are being taken in relation to the Coronavirus pandemic, with emphasis on increasing the capacity for carrying out tests and ensuring the readiness of quarantine centers, particularly as Syrians stranded abroad are beginning to return.