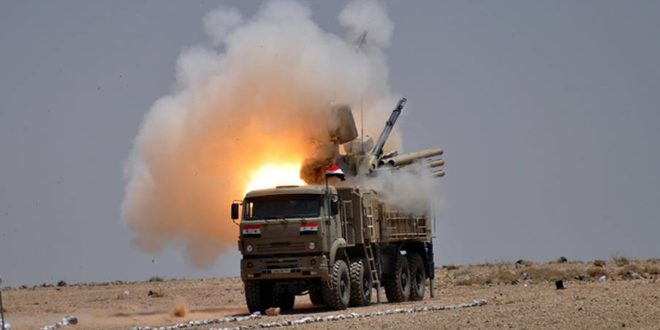 Damascus, SANA- A military source announced that the air space over the northwestern region in Syria, particularly over Idleb province has been closed, and any aircraft that violates the Syrian air space will be considered as a hostile aircraft that must be downed and prevented from achieving its hostile goals.

The military source told SANA that the “Turkish regime’s forces are continuing to carry out hostile acts against our armed forces which are operating in Idleb province and its surroundings whether through targeting our soldiers who are facing terrorists directly, or through providing all forms of support to the armed organizations which are on the list of terrorism according to the international law.”

The source noted that “These repeated Turkish hostile acts will not succeed in saving terrorists from the strikes of the Syrian Arab Army, and they prove the Turkish regime’s disavowal of all the previous agreements including Sochi memorandum.”

The source added that “based on the adherence of the Syrian Arab Army to its constitutional and national duties in defending the sovereignty of the state and protecting its security and territorial integrity, the Army and Armed Forces General Command announces closing the air space for flights and for any drones over the northwestern region in Syria, particularly over Idleb province.”

“Any aircraft that violates the Syrian airspace will be dealt with as a hostile aircraft that must be downed and prevented from achieving its hostile goals,” the source added.