Gabbard: Erdogan most dangerous dictator in the world 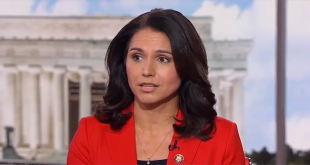 Washington, SANA-US Democratic presidential candidate Rep. Tulsi Gabbard has affirmed that the Turkish regime headed by Recep Tayyip Erdogan has been supporting Daesh (ISIS) and al-Qaeda from behind the scenes for long years, and now it has been forced to show this role which it has played against the Syrian Government from years ago.

In a video published on her account on Twitter, Gabbard indicated that Erdogan is the most dangerous dictator in the world, and he is not a friend for the U.S.

Gabbard noted that Erdogan wants to restore the Ottoman empire and he is working with al-Qaeda and other terrorist organization to achieve that goal.

She warned that U.S. President Donald Trump mustn’t provide support to Erdogan as the U.S. and its mass media have no interest in supporting his paranoia and his terrorist tools which are affiliated to al-Qaeda.

Gabbard added that it is shameful for America and its media to continue to describe the terrorists in Idleb as “gunmen” or “rebels”, condemning in this context the misleading campaigns launched by the international media, the U.S. media in particular and Trump’s administration for justifying their support to terrorists.

She called for passing the Stop Arming Terrorists Act at the Congress which will prevent the U.S. administration from continuing its support to states such as Turkey which supports the U.S. enemy, namely al-Qaeda terrorist organization.

She also called on Trump and the NATO to not support Erdogan in his expansionist war which aim at achieving his defunct Ottoman dreams and not to be dragged into a war with Russia for a dictator aggressive regime. 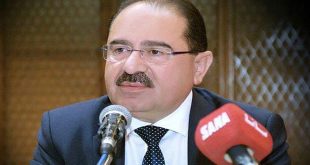 Damascus, SANA – Transport Minister Ali Hammoud asserted on Sunday that there are no explosive …