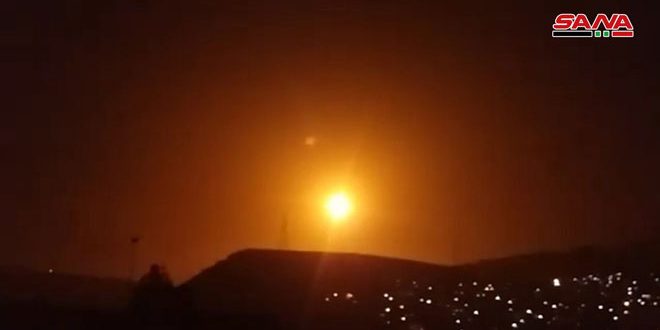 Damascus, SANA-A military source has affirmed that the Syrian air defenses have intercepted an Israeli missile aggression that targeted the suburbs of Damascus and the southern region, destroying large numbers of the hostile missiles.

“The vigilance of our air defenses personnel have contributed to destroying large numbers of the hostile missiles and the aggression caused the injury of eight fighters, in addition to a material damage, and the repercussions have been followed up around the clock,” the source noted.

The source concluded by saying that the Army and Armed Forces General Command “affirms that this Israeli aggressive escalation will not be able to save the armed terrorist organizations which have been collapsing in Idleb and western Aleppo in front of the strikes of the Syrian Arab Army.”

Footage by SANA’s cameramen showed how the Syrian air defenses intercepted a number of the hostile missiles in the air.