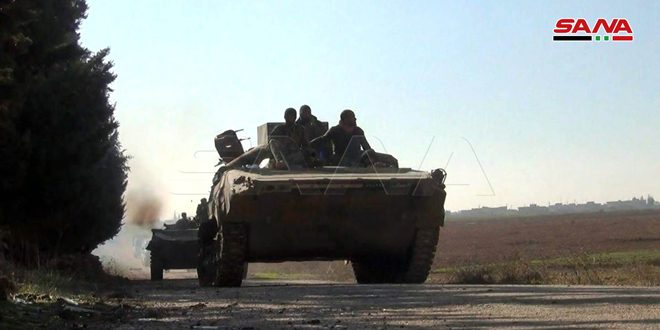 SANA’s reporter in the area said that army units established control over al-Tehh which is one of the most prominent strongholds of Jabhat al-Nusra terrorist organization east of the international highway, following violent battles during which the army killed many terrorists and destroyed their military vehicles and armaments.

Earlier in the day, army units cleared the villages and farms of al-Hraki, al-Qrati, al-Burj, Tal al-Homsi, Tahtaya, and Farwan in the eastern countryside of Ma’rat al-Numan of terrorism, advancing further towards the international highway in the direction of Ma’rat al-Numan city.

The reporter added that the engineering units immediately started to comb the entrances of the villages and clearing their orchards and fields of landmines and IEDs.