Turkish occupation, its mercenaries continue criminal acts against locals to force them leave their homes 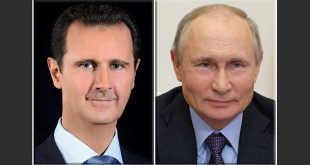 Hasaka, SANA- Turkish occupation forces and their mercenaries of terrorist organizations everyday commit crimes against the locals in the towns and villages which they occupied in Hasaka as they kidnap youths to blackmail their relatives, and they rob the properties of the locals to force them to leave their homes and make terrorist groups and their families to live in their houses in a step that aims at making a demographic change in the region.

Local and media sources affirmed to SANA that over the past few hours, terrorist organizations which work under the leadership of the Turkish occupation forces abducted tens of civilians including elderly people from the city of Ras al-Ayn and the neighboring villages at a barricade established by terrorists in Tal Halaf village, 2 km away from the city.

The families of the abducted said that their sons were beaten and tortured before being taken to a prison set up by terrorists in the center of Haboub village, 13 km from the city, pointing out that a citizen from the village of al-Mubarakiya, 16 km east of Ras al-Ain paid about SYP 1.3 million to terrorists of the so-called “Hamza Division ” in exchange for release of his sons and he hasn’t been released.

Erdogan’s mercenaries had previously kidnapped civilians from villages and areas they had occupied, especially in the villages of Aneeq al-Hawa, Umm Harmala, Hammamat, Hakamiya and a number of villages along al-Safh-Ras al-Ain road, and they demanded a ransom in exchange for their release, similar to what happened with the mayor of the village of Aneeq Al-Hawa, where the terrorists kidnapped him and demanded a ransom for his release.

The Turkish occupation forces tighten the noose on the locals through stealing electricity transformers and the electricity poles connecting villages and towns and transporting them to Turkey and sabotaging the roads between the towns to force the residents to leave their homes.

Over the past few days, local sources reported that the Turkish occupation forces brought dozens of families from Turkish territory to the city of Ras al-Ayn and put them in the homes of citizens seized by terrorists, in addition to stealing and confiscating seeds for the winter season from the peasants, robbing of houses, and taking sums of money from farmers in the area, and preventing many residents from returning to the city and its countryside.

Meanwhile, SANA’s correspondent in al-Hasaka quoted local sources as saying that the Turkish occupation forces erected a series of towers for Turkish telecommunications companies and raised Turkish flags on the headquarters and government departments after being seized by terrorist mercenaries.

Since the beginning of its aggression on Syrian territory last October, the Turkish occupation forces have caused the displacement of about 20,000 Syrian families from their homes in the border areas which they occupied in the northwestern countryside of al-Hasaka province.

2019-11-28
ruaa-jazaeri
Share
Previous President al-Assad in an interview given to French Paris Match Magazine: War against terrorism hasn’t finished yet… Presence of French forces in Syria is an occupation, French government should return to international law
Next Thursday weather forecast: Temperatures lower than average, rain in many areas 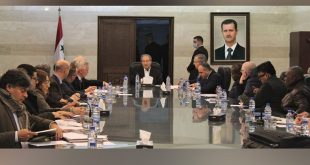