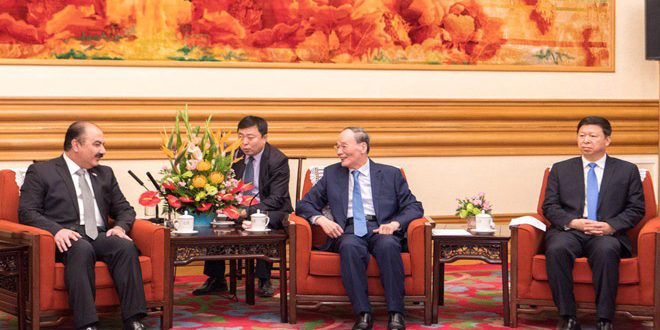 Beijing, SANA_ China’s Vice President Wang Qishan underlined his country’s support to Syria in its war against global terrorism and the imperialist forces that tried to undermine and fragment Syria and impose control over the region.

The Chinese official’s speech came during his matting with Assistant Secretary General of al-Baath Arab Socialist Party, Hilal al-Hilal in Beijing on Friday.

Both sides discussed the existing friendly relations between Syria and China.

Al-Hilal, in turn, conveyed greetings of President al-Assad to his Chinese counterpart, pointing out that the imperialist countries, represented by the United States of America and its allies, wanted to undermine Syria and worked to target countries that seek to serve their people in order to achieve their own interests and agendas at the expense of peoples’ interests.