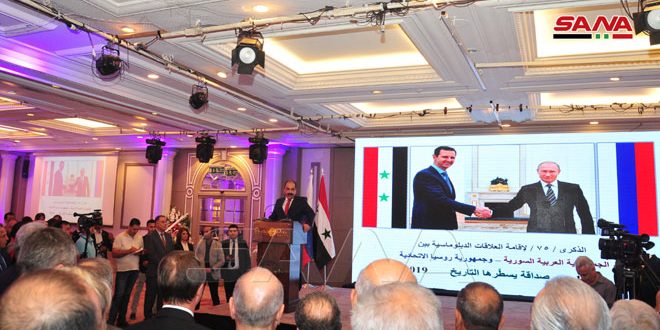 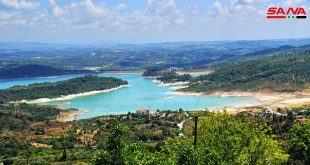 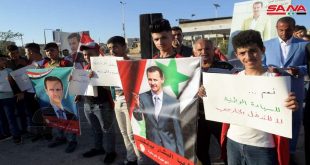 In a speech delivered at the ceremony, Assistant Secretary-General of al-Baath Arab Socialist Party Hilal al-Hilal affirmed that the strategic relations between Syria and Russia are based on friendship and mutual respect and they are rapidly developing as they have been built on solid bases and a great heritage of culture and history binding the friendly peoples of Syria and Russia.

Al-Hilal indicated that the victories realized by the Syrian Arab Army backed by Russia are victories for humanity and all the honorable people across the world as Syria is fighting terrorism on behalf of the whole world.

For his Deputy Foreign and Expatriates Minister Dr. Fayssal Mikdad said that the friendly relations binding the two countries have been always distinguished throughout history and the Syrian people are proud of these relations.

Mikdad added that the relations which have been built between Syria and Russia will become an example to follow with regard to the international relations and they will show that the alliance between the two countries will create new capabilities from the nations of the world.

For his part, Russian Ambassador in Damascus Alexander Efimov asserted that Syria has been always one of the most important partners and allies of Russia in the region.

He affirmed that Russia will not give up its friends in difficult times, adding that his country is trying to find a peaceful solution to the crisis in Syria.

The Russian Ambassador indicated that the presence of illegitimate foreign on the Syrian territories and the presence of terrorists who are backed by hostile foreign powers who are enemies to Syria and its people hinder the process of finding a political solution to the crisis.