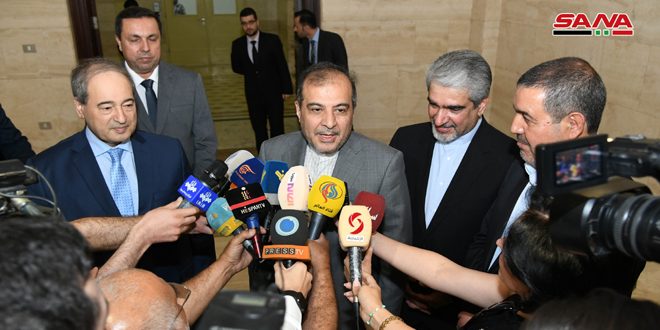 Damascus, SANA-Senior Aide of the Iranian Foreign Minister for Special Political Affairs, Ali Asghar Khaji, described the talks held in Damascus on Tuesday as “very constructive,” saying that there was a wide dialogue on the need for activating and developing bilateral relations between Iran and Syria in all domains.

In a press statement following a meeting with deputy prime Minister, foreign and Expatriates Minister Walid al-Moallem, Khaji added that he held talks about the positive and constructive developments on the political and field levels in Syria. 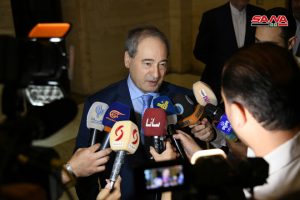 For his part, Deputy Foreign and Expatriates Minister, Fayssal Mikdad, described relations between the two countries as strategic, considering that “the bursting conditions” in the region requires more coordination and mutual visits.

As for the Israeli latest aggression on Syria, Mikdad said that Syria fights Israel in all place through fighting its tools of terrorist organizations, adding that the Israeli aggression goal was to protect these tools, particularly because it came after the achievements of the Syrian Arab Army.

“Syria is ready to pay Israeli occupation back twofold,” Mikdad said, calling for awareness because the region needs calmness, not an escalation, but the world, security Council and the UN should be aware of such developments as Syria will not stand silent on its right.

Mikdad stressed that the fight against terrorism will continue in Idleb and the operation is going ahead according to a delicate plan, adding that the restoration of Idleb to Homeland is a main factor for the return of stability in that region.