Popular Authority for Liberation of the Golan: Resistance will continue till achieving victory 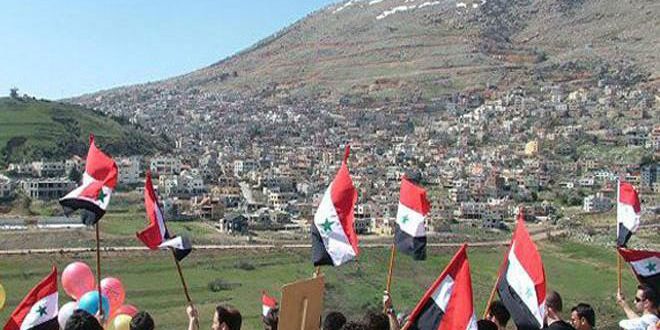 Damascus, SANA- The Popular Authority for Liberation of the Golan has affirmed that the process of liberation and resistance will continue by all legitimate means, and will not stop till achieving victory and liberating the occupied lands and restoring them to their legitimate owners.

In a statement on the 45th anniversary of liberating al-Quneitra City and the 13rd anniversary of its inception, the Authority said that the continued resistance by people of the occupied Golan and their standing in the face of the arbitrary measures imposed by the Zionist entity are not strange as they are deep-rooted in their values and principles.

The statement added that the general strike held by people of the occupied Golan is a part of their tireless struggle against the Zionist occupation till completely eradicating it.

The Authority considered that what the Zionist occupation and its US partner are betting on, has been undermined by the steadfastness and will of the Golan’s people who support the will of the Syrians to continue the resistance till liberating the occupied Syrian Golan.