Moscow: Washington seeks to retract withdrawing its forces from Syria 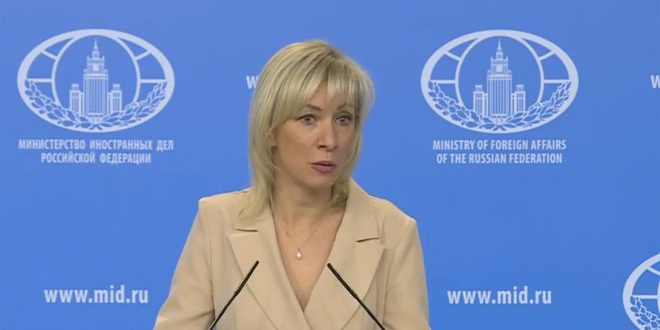 Moscow, SANA_ Russian Foreign Ministry Spokeswoman Maria Zakharova said Moscow had the impression that the United States was trying to back down from withdrawing its forces from Syria.

“The presence of US forces is illegal in Syria and does not lead to calming the situation but rather to escalating it and supporting terrorist organizations,” Zakharova said at a press conference on Friday.

She stressed that if Washington has intentions to withdraw from Syria, it should achieve it because it is a positive step, but the most important is the return of the areas from which the US troops will withdraw to the Syrian State authority,”

On de-escalation zone in Idleb, Zakharova stressed that this area is temporary, underlining the need to prevent its transformation into a haven for terrorist organizations.

“We are committed to implementing the terms of the Sochi Agreement on Idleb and preventing its failure,” she said, stressing the need to freeing it of terrorist organizations.

On the use of chlorine gas by armed terrorist organizations in several areas of Aleppo City last November, the Russian Diplomat called on the Organization for the Prohibition of Chemical Weapons to exert greater efforts in investigating this incident.

” Taking into account the time which elapsed since this incident, we are calling on the OPCW Technical Secretariat to galvanize the investigation and present a report to the organization’s executive council based on its results,” she said.

Zakharova hoped the organization’s experts will directly visit the area targeted by terrorists to see on the ground the fact of this chemical attack.