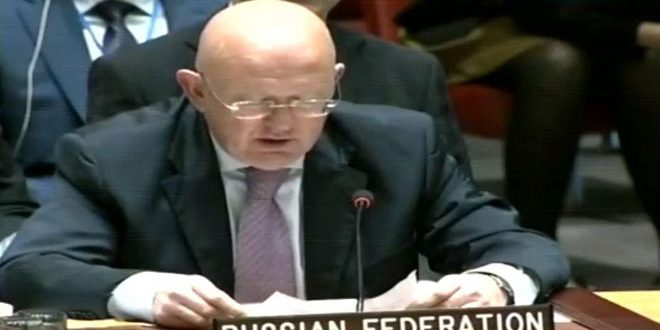 New York, SANA- Russia’s Permanent Representative to the UN, Vasily Nebenzia, stressed that the unilateral coercive measures imposed on Syria contradict with the international law and hinder all the efforts to reach a political solution to the crisis in it.

During a session of the Security Council on the Situation in the Middle East, Nebenzia called upon the international community to support the reconstruction process in Syria and to facilitate the return of the displaced Syrians to their country.

He reiterated that the guarantor states of Astana process “continue their work to find a political settlement to the crisis in Syria meanwhile, the so-called “Mini Group on Syria” tries to impose dictations and to hider the solution.

The Russian diplomat stressed that Russia has always supported the efforts exerted by the UN with regard to the settlement of the crisis in Syria, yet achieving more progress entails exerting constructive efforts by all the parties on all levels away from any geopolitical destructive projects.

He indicated that the agreement on Idleb is achieving good results, and Jabhat al-Nusra couldn’t be allowed to hinder its implementation.

Nebenzia added that all the international parties should respect the sovereignty and territorial integrity of Syria and any area in it couldn’t be considered as a separate part that has its own entity.

He said that the Russian air forces exist in Syria in a legitimate way upon a request by the Syrian Government to provide help in the war against terrorism.

“I ask the US Representative about the reason behind the presence of the US forces in Syria…Is it to fight terrorism or for dividing the country and implementing colonial policies?” Nebenzia wondered.

He noted that combating terrorism is only a pretext used by the “international coalition” which is led by the US to stay in Syria as the raids it carries out kill the Syrian civilians with internationally banned weapons.

He called for conducting a separate investigation on the news on using phosphor by the coalition in Hajin town in Deir Ezzor.

Nebenzia said that the so-called “White Helmets” organization is one of the active parties who are using toxic substances which the Syrian state has been accused of using, adding that the terrorists of this organization who have been transported from Syria threaten the countries of the region.