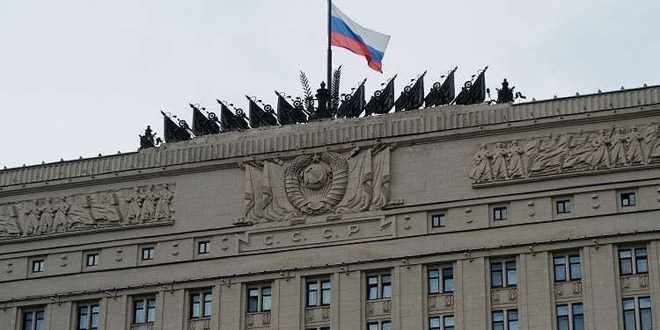 Moscow, SANA –Russian Ministry of Foreign Affairs said that Western states are responsible for obtaining poisonous substances by terrorist groups in Idleb due to their irresponsible acts and their support to the terrorist groups to stage a chemical attack in order to justify a foreign aggression on Syria.

Head of the Russian Reconciliation Center in Syria Lt. Gen. Vladimir Savchenko said in a statement on Wednesday that Western states are planning to use the groups affiliated to them in staging a chemical attack to accuse the Syrian governmental forces of it, and they ignore the complicated situation in the so-called “demilitarized zone” in Idleb.

The Russian official said that these acts are irresponsible and they allowed Daesh (ISIS) to obtain toxic substances.

Savchenko’s statements came after a terrorist group on Wednesday evening attacked a position of Jabhat al-Nusra in the vicinity of al-Latamina town, north of Hama, and seized amounts of poisonous materials that were inside the position.

The Russian military official noted that confirmed information indicated that there had been terrorists from the “White Helmets” organization inside the position when it was attacked as a number of them were killed and the attacking terrorists seized two cylinders of chlorine gas.

Savchenko added that the stolen cylinders were transported to Aleppo southern countryside and they were handed to a group of Hurras al-Din (Guardians of Religion)which is affiliated to Daesh terrorist organization.